Staying within our fourth section of our classification where we place arms in which charges representing part of the bearers' names are combined with ordinaries we can place the chevron and cocks' heads of Alcock of the Ridge. 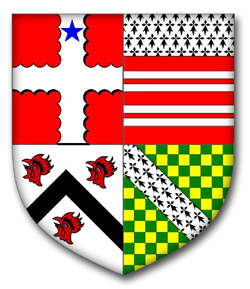 Leigh of the Ridge

My sharp eyed reader may have noticed that in this fourth section, with one exception, that of the cocks' heads of Alcock which are red, in each each of these shields the field is silver and the charges are all black. Curious.