Well. I have now finished the Visitations of 1613 and the last page can be accessed here:

The last image to go into the 1613 folder was the arms of Wyche, of Davenham

[This Coate was confirmed & the creast graunted unto Tho: Wyche of Davenham p William Flower Norroy in the 29 yeare of Quene Elyza: Ao 1587.]

Since posting the arms of the Leigh Baronet I have redone the image:

Although there has been no official announcement, the retirement of Robin Orr Blair, LVO, Lord Lyon King of Arms has been leaked on the HSS forum.

It seems that Mr. Brian Hamilton has been informed that "A recent correspondent to the Lyon Office was told to delay his petition until after the New Year (2008) as the present Lord Lyon was retiring from office in December."

Mr. Hamilton was "surprised that no one else has posted on this subject so far."

The retirement of Mr. Blair from office has been the subject of a serious rumour for a number of days now though it would seem, from what I gather from another reliable source, this is rather more substantial than a mere rumour as it has now been confirmed by a senior member of Lyon Court. It seems that the intention is to advertise the post once more. Those familiar with Lyon Court will know that Mr. Blair was the first to be appointed to this post following public advertisement of the vacancy in 2001. [The first being the fact that the post had never before been advertised in the National Press]

Since we all love to speculate and it would seem that the speculation over a possible retirement is over, I shall indulge in a wee bit of my own speculation. I know that Carrick would perhaps be a more obvious immediate choice but my money is on W. David H. Sellar, Bute Pursuivant of Arms who was appointed Bute Pursuivant on 1st November 2001.

It could of course be YOU !

I have now finished the site update for the Cheshire Visitations 1533 to 1580.

I have recently been asked to produce the arms believed to have been used by Sir Samuel Egerton Leigh Bart.

The third baronet's quarterings are believed to be represented as follows :

4      Stanley   : Argent on a bend Azure three Stags' Heads cabossed Or (the arms of the Earl of Derby)


6      Brandon   : Barry of ten Argent and Gules a Lion rampant Or ducally crowned per pale of the First  and Second

A question of Seal Cases

From time to time (frequently!) I am asked questions pertaining to the Heraldry of Cheshire via my Cheshire Heraldry web site and I do my best to give a sensible and informative reply. Today, however I received a request for information which was a tad beyond my limited knowledge and was not in any case specific to Cheshire.


Since my letters patent are safely sleeping in a bank vault and I never thought to measure the seal cases, I fell at the first hurdle!

I suggested the enquirer might like to send the same letter to the College of Arms. I often wonder why questioners don't seek a reply straight from the horse's mouth. Why this enquiry came to me instead of them, I'll never know.
at June 04, 2007 No comments:

From time to time I am asked for either information or an image. I have today spent some time providing an illustration of the arms of Leigh of Charlestown, South Carolina, Bt.

The arms are listed in Burke's General Armory as Or, a lion rampant Gules. Crest is given as  A cubit arms erect, habited, grasping a tilting spear in fesse all proper. 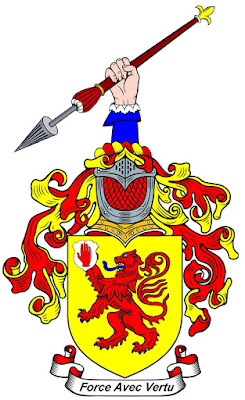 Below the bookplate with the arms of Leigh of West Hall: 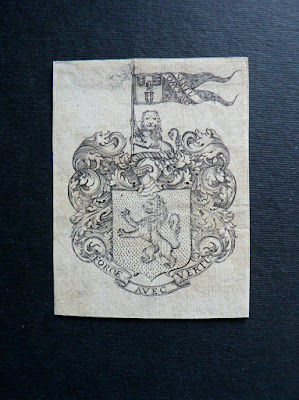