Having recently completed a number of Leigh images, I had been hoping to do an illustration of the "other" crest of Leigh of West Hall but find that I don't have all the information!

Burke's General Armory lists two crests, the first of which is illustrated in colour on the image below: 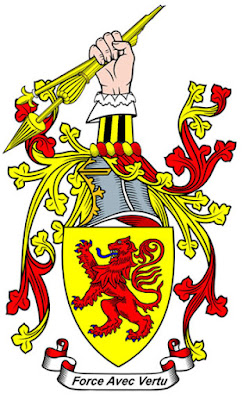 The second crest is blazoned thus:

A demi-lion rampant Or, holding a pennon displayed Azure charged with two bars Or inscribed Force Avec Vertu and with a shield of the arms of Leigh of West Hall High Leigh on which are three escutcheons of pretence, with the arms of the three husbands of Agnes de Leigh of West Hall viz: Lymme, Venables and Haywarden.

An illustration of a bookplate showing this crest can be seen below: 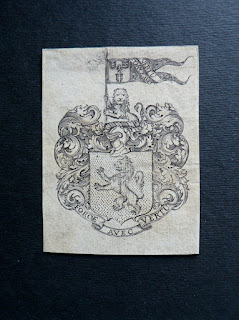 My difficulty is this; I know that thew arms of Lymme, husband of Agnes are Gules, a pile lozengy Argent - but I do not know the blazon of the remaining two arms, those of Venables (it appears to be a bend sinister) and Haywarden (Hawarden?) (it appears to be a cross).
at July 06, 2007 1 comment: