Malta and its so called Chief Herald

The armorial bearings newly devised and used by the "Office of the Chief Herald of Malta".

You may be aware that earlier in the year I had been asked by Dr Danielle Mallia, Chief Investigating Officer at the Office of the Government Ombudsman (Malta), to respond to the FAQs posted on the website of the Chief Herald of Arms of Malta.

The full details of my forensic examination of the FAQs is available here: Examination into the claims of the "Chief Herald of Malta".

In this response, I believe that I have been able to amply demonstrate that the Chief Herald has failed to prove that he, and therefore by definition, Heritage Malta, have the powers to regulate heraldry and to grant new armorial bearings or to register and or matriculate existing foreign armorial bearings that have no cultural or heritage connection with Malta; that the powers of Heritage Malta, as set down in the Act of its creation, are limited to the recording, preservations and promotion of Malta’s cultural heritage and that neither the Prime Minister, or the Cabinet, or any one Minister, have the powers to act in this matter without the consent of Parliament.

I believe that whoever had the idea of creating a Chief Herald of Malta made an error and, in presenting the idea to the Cabinet, either overlooked or ignored the requirements set out in Section 10 of the Act setting out the powers of Heritage Malta which states quite clearly that matters pertaining to National Strategy for Cultural Heritage should be set out in a paper which will be tabled in Parliament for discussion. This would mean that all acts undertaken by the Chief Herald are ultra vires, have no foundation in law and are therefore void.

There has, since my initial post, been an exchange of correspondence so I thought that you might appreciate an update. I have posted a note of the progress so far here:
Update on the investigation into the "Chief Herald of Malta"

Email ThisBlogThis!Share to TwitterShare to FacebookShare to Pinterest
Labels: Fakes and Fables, Heraldry, Odds and bobs

Having a few moments to spare, I thought that I would allow public access to some of my Google Photo Albums. Those with a certain heraldic interest have been added, as a gallery, to my Heraldry Addict website (which is something of a new project and so is evolving). 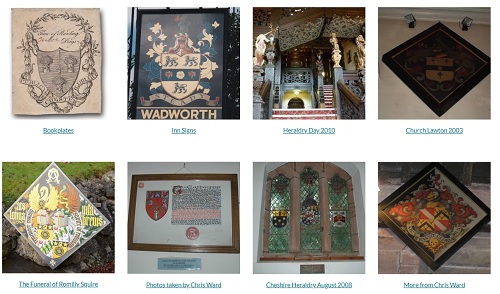 You can find my new Gallery by clicking on this link:

The latest of my talks, released today, is based upon items sold at auction in 2011 and is of interest from both an historical and heraldic viewpoint. We are going to look in some detail at the Ceremonial Regalia of the Manorial Court held at Ashton-under-Lyne.

While we are on the subject of Macclesfield, back in January 2011, I was made very welcome when I made an heraldic visit to King's School Macclesfield.
Here is a photo I took of their grant of arms: 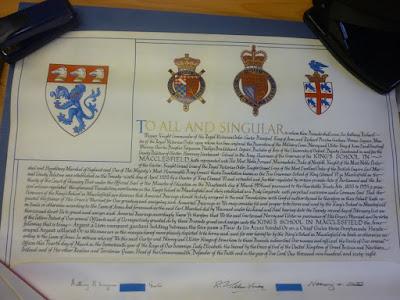 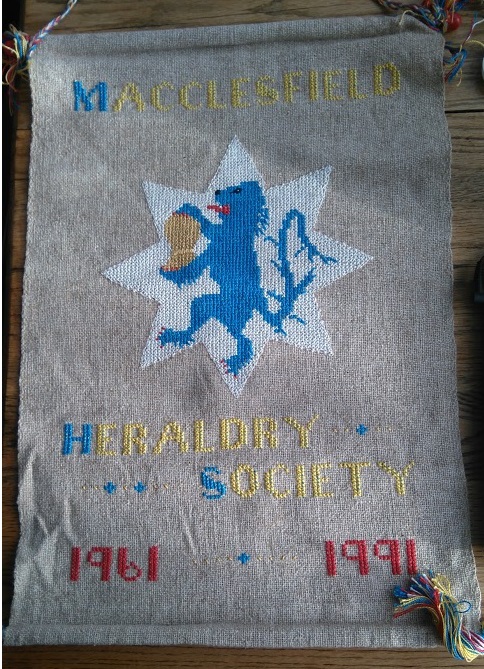 Here is one for the detectives. This mystery bookplate is in a copy of "A Catalogue of British Family Histories" acquired for the princely sum of £2 (I would not have bought the book had it not included the bookplate!). As you can see, it has at some point in its history been wantonly vandalised to remove the name of the original owner! 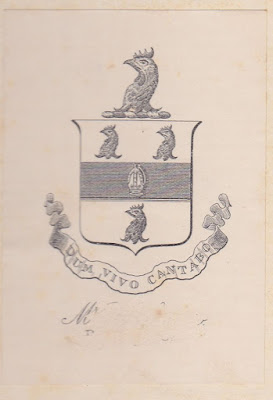 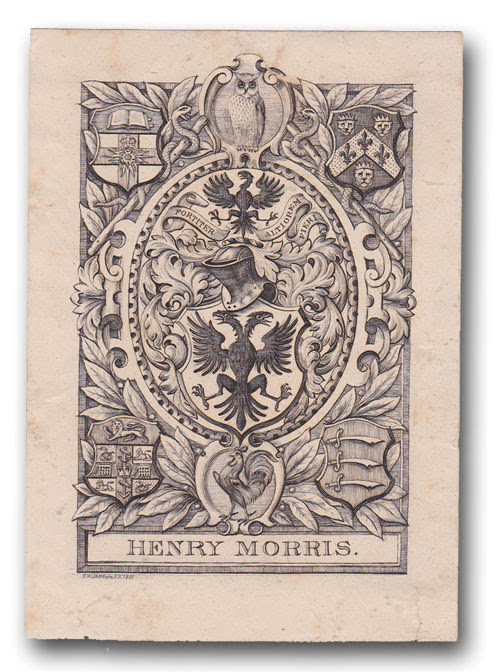 A nice trio from my collection. The two for Ernest are different sizes (in case you were wondering). I like the one for husband and wife. The impaled arms on the image of Mary's bookplate are those of Grazebrook. The work of Gerald Cobb. 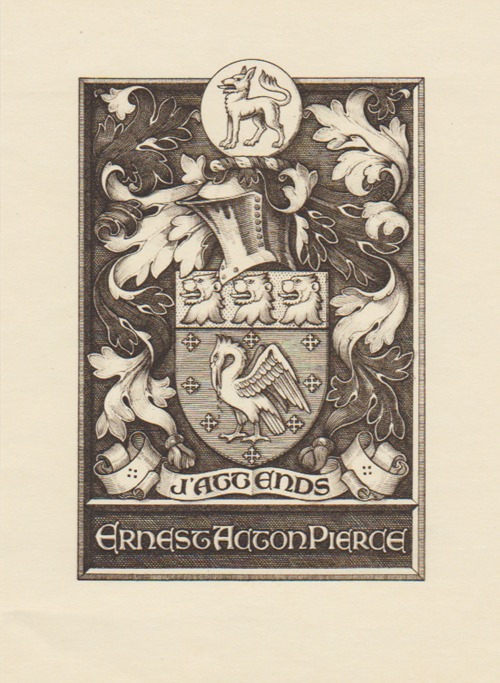 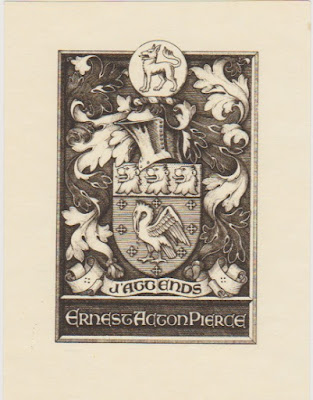 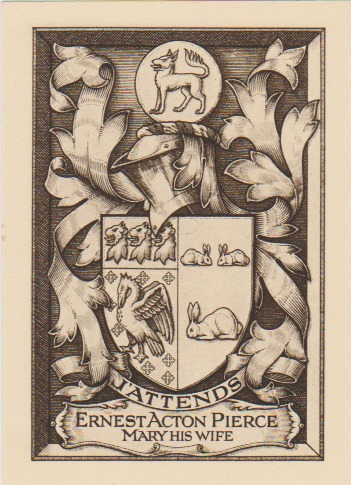 Bookplate of The Reverend Sir George Lee Bt. of Hartwell. 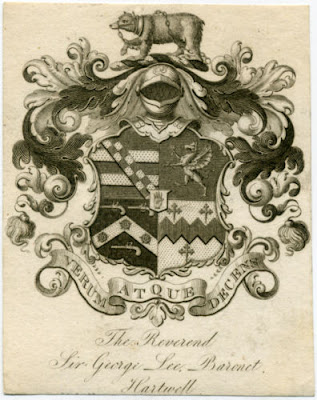 The bookplate of Oswald Prior-Wardell-Yerburgh of Hoole Hall Chester. 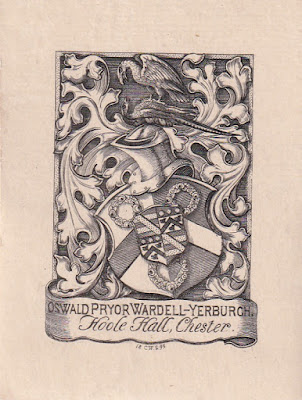 The arms in pretence are for Edith Wardell Potts. The Rev Oswald obviously felt that adding Wardell to his name had more cachet than Potts! (with thanks to Richard Lichten).
at June 10, 2020 No comments:

Here is a photograph of the arms on the Merchant Adventurers' Hall, York. 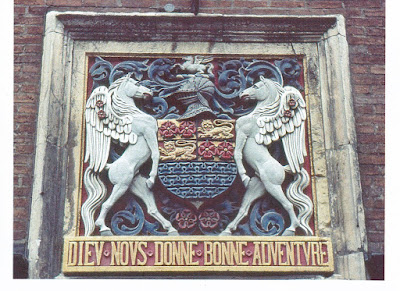 These arms are discussed in the latest of the talks I have uploaded to You Tube.

Admittedly it is a bit long but feel free to take a cuppa whenever you wish.

The Heraldry of the Cheshire & Lancashire Funeral Certificates 1600 to 1678

I have just let loose on the world another one of my talks. Admittedly it is a bit long but feel free to pause it and have a cuppa whenever you want.

This talk is about Cheshire & Lancashire Funeral Certificates A.D. 1600 to 1678 (…A selection of…) It features illustrations of a selection of the armorial bearings of the Cheshire and Lancashire gentry whose Funerals were certified by representatives of the College of Arms.
Funeral Certificates were taken pursuant to the “Orders to be observed and kept by the Officers of Arms made by the High and Mighty Prince Thomas, Duke of Norfolk, Earl Marischall of England Ano 1568, the 18th day of July in the 10th year of the Reign of Queen Elizabeth. Wherein it is ordered that every King of Arms, Herald, or pursuivant that shall serve at any funeral …. Shall bring into the library or office of arms a true and certain Certificate under the hands of the executors and mourners that shall be present at the said funeral containing the day of the death, the place of burial of the person so deceased; and also to whom he or she was married, what issue they had, what years they were of at the time of the said burial and to whom they were married, to the extent that the said certificate may be registered and so remain as a perpetual record in the said office for ever.
at June 08, 2020 No comments:

A Bookplate from my collection.
19th century Seal Armorial Bookplate of Reginald Cholmondeley, Condover Hall [Shropshire]. F.5807.
Reginald Cholmondeley of Condover Hall, Shropshire, (1826-1896) son of Rev. Charles Cowper Cholmondeley m.1867 Hon. Alice Mary Egerton (1836-1868) dau of William Tatton Egerton, 1st Baron Egerton (1806-1883) who m.1830, Lady Charlotte Elizabeth (d.1878) dau of John Loftus, 2nd Marquess of Ely, KP PC. Reginald Cholmondeley was host to the American writer Mark Twain (1835-1910) when he visited in 1873 and 1879. The house and estate was sold out of the family in 1897. From 1926 Condover Hall had various institutional uses and is now a residential activity centre. Reginald’s paintings and library were sold soon after his death. 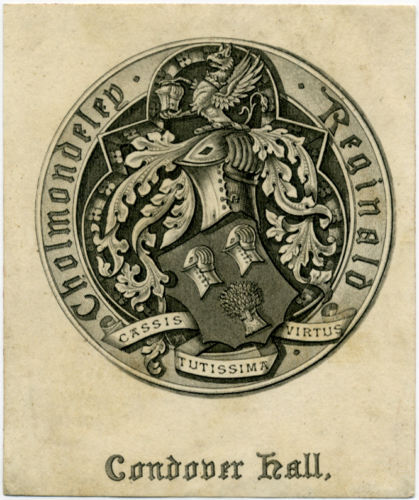