It is with some sadness that I mark the death of Barry Wilde, doyen of neighbouring Manchester Heraldry Society, who died on February 16th at his home in the City of Swinton at the age of 59. Barry was by profession a laboratory technician but it was his enthusiasm for heraldry which brought him into contact with many societies including The White Lion Society and The Heraldry Society. He was married to Helen and leaves behind two sons and five grandchildren. His armorial bearings are a fitting memorial to his life. 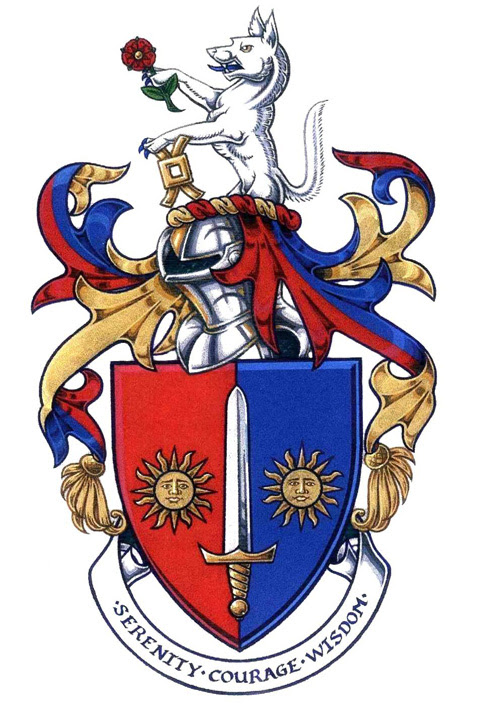 Arms - Per pale Gules and Azure a sword erect Argent hilt pommel and quillons Or between two Suns in splender visaged also Or.

Crest - A demi Wolf Argent armed and langued Azure holding in the dexter paw a rose Gules barbed and seeded proper and resting the sinister paw on a Millrind Or.

The sword is to represent the numerous causes that Mr. Wilde gets involved with. The suggestion to include a sword in the arms was done a little tongue in cheek as he has no personal military background and feels lucky that the suggestion was accepted. The two suns represent his his pride and joy, his offspring. The crest bears a red rose for Lancashire, a millrind for engineering and a wolf that may also be seen in the original arms of the City of Salford, his hometown.

[Image, blazon and rational behind the design courtesy of The Greater Manchester Heraldry Society]
at February 26, 2009 No comments:

A plea from the Shires. (An open letter to the Heraldry Gazette)

A plea from the Shires.

May I, through the membership magazine, table a plea from the Shires that the Council of our Society give consideration to holding its lectures and meetings on a Saturday. There must be other members living some distance away from the capital who, through working commitments, find it impossible to attend meetings held during the week regardless of whether they are held during the day or in the evening. For a resident of the Shires to attend a meeting at 6.30 p.m. followed by wine and social discourse at 8.30 p.m. after a normal working day would not only mean leaving work early to catch a convenient train but, more importantly, would mean a very late return home culminating in an exhausting day of work and leisure.

If only meetings could be held early on a Saturday afternoon those in my predicament could make it a leisurely and enjoyable day out, setting out at a reasonable hour and returning home in good time. I am quite convinced that such a move would increase your audience; presently, I find it impossible to attend meetings of The Heraldry Society in London but have much less difficulty attending meetings of The Heraldry Society of Scotland in Edinburgh simply because they are held on a Saturday.

The Cheshire Heraldry Society Christmas lunch, held in December of last year, was a very pleasant affair held in The Bells of Peover, Lower Peover. The pub itself might have put on a heraldic display especially for us as the room we were served lunch in was full of heraldry; more will be revealed when I manage to obtain a data cable to allow me to transfer the photos I took with my mobile phone to my computer!

Adjacent to the pub is the Church of St. Oswald's in which can be found, on several of the pews, the crest of the Shakerly baronets (photos promised when I can transfer them to my computer). I left in the Church a print of the arms of the baronet that I had prepared specially for our visit but regret that because of a computer failure I lost the image I had made and so can't reproduce it here ... however, I received today a note from John Allen (he of the Chiltern Heraldry Group) enclosing a photo of the armorial bearings of Shakerley engraved upon the lid of a Sheffield plate meat dish currently being offered for sale through Fellows Auction House in Birmingham. 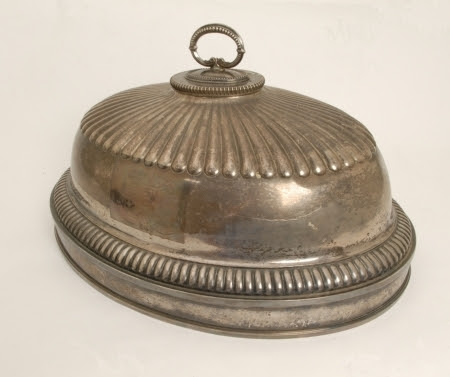 Fellows Auction House Birmingham 2nd March 2009-02-19
Estimate £100 - £150
“A George III Old Sheffield Plate oval part fluted meat dish cover with a later beaded handle, a nulled finial, a fluted band an inset panel engraved with an armorial, 20.5 x 16 inches (52.5 x 40 cm). The arms of SHAKERLEY of Somerford Park, Cheshire. Sir Charles Shakerley was created a baronet in 1838 and married 1st. (1819) Laure, daughter of the Duc d'Avaray and 2nd. (1831) Jessie Scott of Rotherfield Park, Hants. He traced his ancestry back to Geoffrey Shakerley of Shakerley, Lancs. (temp Henry VII) and numbered John Legh of Booths, Robert Grosvenor of Hulme and Sir Randal Mainwaring of Over Peover among his ancestors. The arms of these important Cheshire families are among the many enthusiastically but unconventionally quartered in this engraving.” 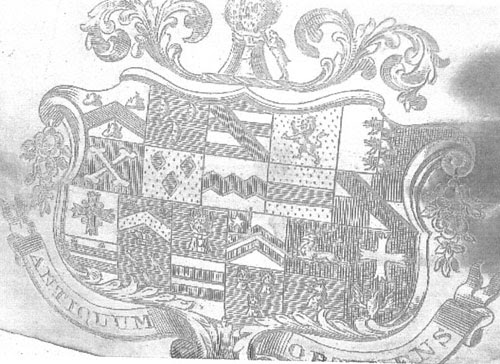 I have made a stab at the quarterings as follows:

Fire at the College of Arms

The BBC is reporting that there has been a fire at the College of Arms:

[Quote]A fire that broke out on two floors of the College of Arms in the City of London has been brought under control, London Fire Brigade (LFB) has said.

Some 35 people were evacuated from the building on Thursday morning.

The coats of arms and pedigrees of English, Welsh, Northern Irish and Commonwealth families are kept there.

There are no reports of any injuries and another 100 people were asked to leave adjacent buildings.

Fire had broken out in parts of the third and fourth floor.

A spokesman for the LFB said so far no historical documents have been reported lost or damaged in the fire.

The curator at the College is working ''closely with fire crews to preserve historical manuscripts held in the building".

Fire crews from Dowgate, Islington, Clerkenwell, Soho and Euston were called in to the incident.
Eight fire engines were sent to the scene
Records at the College of Arms also include official copies of the records of Ulster King of Arms, the originals of which remain in Dublin.

The officers of the college specialise in genealogical and heraldic work for clients and are therefore called heralds.

In 1484 heralds, who worked for the monarchy and noblemen, were given a house in Coldharbour in Upper Thames Street to keep their records.

When Henry VII came to power in 1484 the building was taken away from them.

In 1555 they were given the current site where Derby Place stood.

Derby Place was gutted in the Great Fire of London in 1666 and the current building was built at the site in the 1670s.

The College is overseen by the Earl Marshal, a hereditary office which has been held by the Duke of Norfolk.

My thoughts are with all the Officers of Arms and their staff; it is reassuring to note that the report states that none were injured but I have no doubt that all will be feeling shocked and bruised by the experience. It is but a minor and secondary thought that one hope no records were indeed lost or damaged.
at February 05, 2009 No comments: