My reader, who has no doubt been closely following the Malta saga, will be pleased to learn that things are moving on apace. Prior to being able to place a formal accusation of Misconduct in Public Office against the Chief Herald of Arms of Malta before the Government Ombudsman, I had to go through several prior steps, the most important being to lay my complaint before his employer, Heritage Malta, to give them a chance to investigate. This I did however, Heritage Malta chose to take the same route they did when I first put it to them that the Office of Chief Herald had not been properly founded; they immediately went on the attack and defended their employee. History now shows that the advice they received from their advocate in that initial matter, advice that led them to set down their reasons for the legitimacy of the office, provided me with ample opportunity to forensically pull it apart and, ultimately, led to the Ombudsman finding against that advice and the eventual correct legislation being put in place.

I wrote to the Chief Executive of Heritage Malta putting a simplified case to him on the first of August and yesterday, 11th August, received a reply from Heritage Malta’s legal advisers. I briefly responded. It now appears that the Chief Herald has decided that he can print that letter in full on his website so I shall, with the greatest of pleasure, share with you my brief reply. Now that I have received the formal “Reply as to the legal legitimacy of the Chief Herald of Arms of Malta”. I now have the “official” defence and now have a document to forensically examine to provide further evidence to the Government Ombudsman. I shall be doing so shortly however, as I will be attending the Cambridge conference next week, please don’t expect my response to be prompt.

Here is the link to the “Reply as to the legal legitimacy of the Chief Herald of Arms of Malta”:

And here is the link to my brief response: https://bit.ly/3pbDQgr

I am particularly looking forward to forming an opinion on the lawyer’s comment that in regard to Coronets, supporters etc “the Government recognises only the totality of the Arms as belonging to an individual not any particular significance given by third parties to any specific components therein. As far as the government is concerned, one can display anything one likes in one’s coat of Arms …”

I shall be away at the Cambridge Conference next week but rest assured, I am really looking forward to drafting my complaint to the Ombudsman.

I have been informed by a friend of the Cheshire Heraldry website, Michael Furlong, that a French auction site is offering for sale a painting which appears to be the arms of the Barons Brereton. 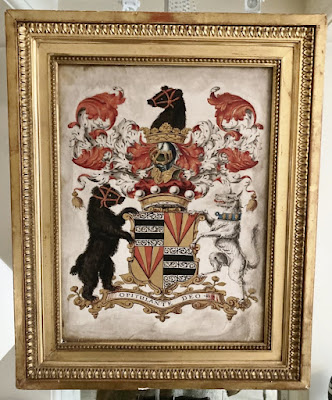 The 2nd and 3rd quarters appear to be "Or, three piles conjoined in base Gules"

I'm not sure where the Italian reference came from but many thanks to Michael for alerting me to it.