I have written before about the difference between an orle and an escutcheon voided and I maintain that there is a difference, perhaps not immediately apparent when shown on a single (escutcheon shaped) shield but obvious when shown on a quarterd shield or banner. The example I use is that of Winnington whose entry in the Visitations varies between the two. In the Visitations of 1513/80 and those of 1613 it is noted as an orle. However, it is apparent from contemporary usage that the family always depicted it as an escutcheon voided and this is best illustrated by reference to a hatchment in the possession of Marple Hall School showing the arms of Winnington of Offerton as recorded in the Visitations.

Winnington of Offerton
Arms: Quarterly -
1 & 4 Argent, an orle within eight martlets in orle Sable, a mullet for difference.
2 & 3 Gules, on a chief Or three annulets of the field [Offerton]

Crest: An alembic, or still , Argent charged with a mullet for difference. 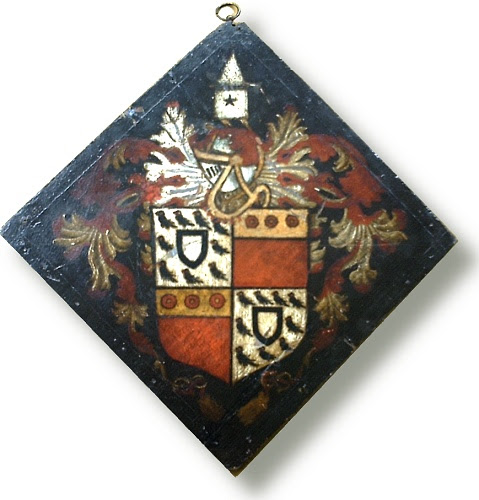 The eagle eyed amongst my readers may have spotted an interloper on the Winnington quartering. It is my belief that the painter executing the hatchment was copying some other work and mistook the mullet indicating cadency for another martlet.
at November 25, 2010 No comments:

I was searching Google this morning for references to the Malbank barons of Nantwich and decided to flip to the image view. Up popped a number of images which I remembered making for the "King's Vale Royal" section of the Cheshire Heraldry web site some years ago; curiosity got the better of me and I clicked on one of the images expecting it to lead me to the aforementioned part of my web site ... unfortunately it did not. I was taken to someone else's web site where every image used to illustrate an article entitled "They came they saw they conquered" has been stolen from Cheshire Heraldry and used without shame, permission or acknowledgement.

This is not the first time it has happened and I dare say that I'm not the only one it has happened to. Why is it that people think the Internet is not subject to copyright laws? It takes me hours to make an image and it is infuriating to see others use it without even asking. I shall write to the offender asking him to remove the images to give him a chance to put his house in order before I take legal action.

A section of the offending web site: 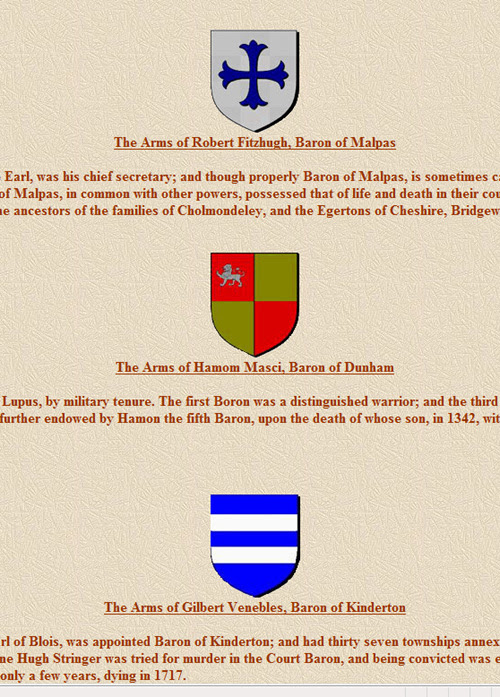 Back in September of last year I wrote about the 12th quarter in the arms of Brereton of Ashley as recorded in the Visitations of 1613; it is recorded as being Gules, a lion rampant Sable guttee de l'armes but is marked as being "dubious". In the earlier Visitations of 1533 to 1580 this quarter, which remains unidentified, is recorded as Gules, a lion rampant Ermines. I have since discovered that the arms of Brereton of Ashley are also noted in another MS; Harl.1170 and are in fact illustrated. 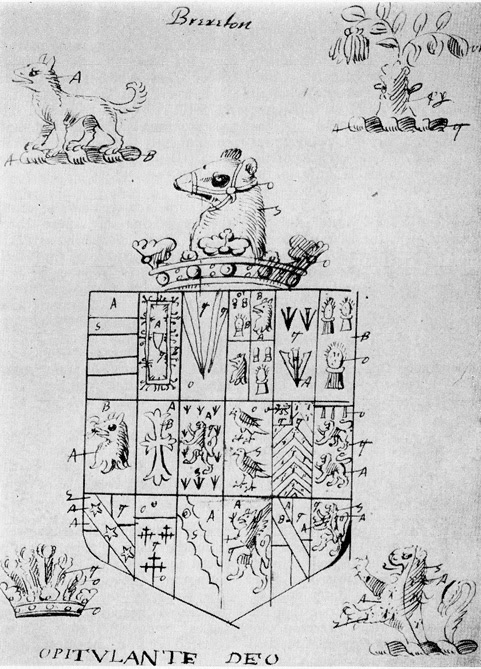 1 Argent, two bars Sable [Brereton]2 Argent, an inescutcheon within a double tressure counter flory Gules [Scotland]3 Or, three piles in point Gules [Scot Earl of Chester]4Quarterly; 1 & 4 (Kevelioc and Lupus) 2 & 3 Azure, three garbs Or (Kevelioc Earl of Chester)5 Gules, three pheons Argent [pro Egerton inherited from Belward, Baron of Malpas]6 Azure, three garbs Or [Kevelioc Earl of Chester]7 Azure, a wolf’s head erased Argent (in this image he appears to have a ring in his mouth!) [Lupus Earl of Chester]8 Argent a cross flory Azure [pro Egerton inherited from Malpas, baron of Malpas]
9 Argent, a lion rampant Gules between three (sometimes six … here ten) pheons Sable [Egerton of Egerton]
10 Or, two ravens in pale Sable [Corbet of Leighton]
11 Ermine, five chevronels Gules, on a canton of the second a lion passant Or [Orreby]12 Gules, two lions pasant Argent, a label of three points Or [Strange of Dalby]13 Quarterly Argent and Gules, over all on a bend Sable three mullets of the first [Ashley]
14 Gules, three cross-crosslets fitchee Or, a chief of the second charged with a crescent for difference [Arderne]15 Argent, on a bend engrailed Sable, an annulet Or [Radcliffe]16 Argent, a griffin segreant Gules [Chaderton]17 Quarterly, Argent and Gules, a bend Azure [Timperley]

It is believed that there is no real evidence to substantiate the descent bringing in the quarterings of the earls of Chester line.

You are cordially invited ...

The next meeting of the Cheshire Heraldry Society will be on Saturday 20th November and our speaker will be Stephen Slater whose topic is Heraldic Bastardy *.

Details of times and venue can be found on the Society's web page.

* This meeting is presented in conjunction with The Heraldry Society.
at November 12, 2010 No comments:

I shall be presenting my talk on the armorial bearings of the Gunpowder Plotters to The Greater Manchester Heraldry Society on Saturday 6th November ... I look forward to seeing you there. 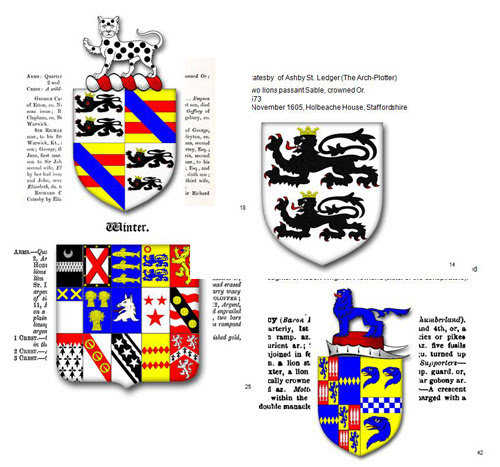