Visitations at a discount

Here is the latest discount code for my books available via Lulu.com

The full range can be found here:

http://www.lulu.com/spotlight/martinatcheshireheraldrydotorgdotuk
at September 19, 2018 No comments:

Recent conversations about The Addams Family, a fictional household created by American cartoonist Charles Addams, reminded me that there is another family of the same name of far greater historical importance, the Adams family of North Staffordshire. Richard Adams, 1739 - 1811, was a master Potter and is of immense importance to the history of pottery making.

The Adams family and the families they married into were, in the most part, armigerous. 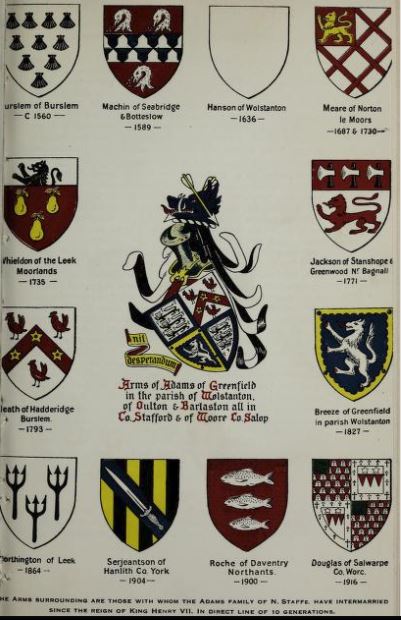 Images from Notes on some North Staffordshire Families by Percy Adams.
at September 17, 2018 No comments:

Book Review in the Heraldry Gazette

I was most gratified to see, in the September edition of the Heraldry Gazette, a book review of my latest illustrated book The Visitations of Cheshire 1613: A Cheshire Armorial however, I felt obliged to send the following note to the editor.

"I am most grateful for the book review (The Heraldry Gazette September 2018) however, I feel I ought to drop you a note to preempt the inevitable outcries over the impression lent by the review that the book is based upon a work by Ormerod; this is a result of the reviewers editing of two paragraphs into one short sentence, an inevitable result no doubt of a lack of space, and not an error by the author. The work, as stated in the book under review, is in fact based upon the armorial bearings recorded at the Heralds' Visitations of Cheshire in the year 1613 as published in 1909 by The Records Society for the publication of original documents relating to Lancashire and Cheshire.

Would you kindly note my corrective comments lest I be hung drawn and quartered as an innocent man! "

P.S. Should you need to refer to it, the unaltered reference is as follows:

This book is the second of a series of illustrated armorials entitled Cheshire Heraldry. None of the books in this series are intended to be authoritative; their simple purpose is to act as an illustrated companion to add some colour to other more scholarly works such as the Harleian MS series of Cheshire Visitations and the magnum opus produced by George Ormerod entitled The history of the county palatine and city of Chester ...incorporated with a republication of King's Vale Royal and Leycester's Cheshire antiquities.

This volume features illustrations of the armorial bearings recorded at the Heralds' Visitations of Cheshire in the year 1613 as published in 1909 by The Records Society for the publication of original documents relating to Lancashire and Cheshire. The book published by The Records Society contains few illustrations and those that are included are in black and white.

The lectures of the Cheshire Heraldry Society kick off with a welcome visit from Charles J. Burnett Esq. KStJ, DA, MLitt, FHSS, FSAScot former Ross Herald of Arms who will be talking to us on the 22nd September on the topic of Napoleonic Heraldry. Details can be found on the Society's webpage http://cheshire-heraldry.org.uk/society
at September 12, 2018 No comments:

Three photos from our visit to Sirmione, Province of Brescia, Italy.

Here is one, the others can be seen by clicking on the link below. 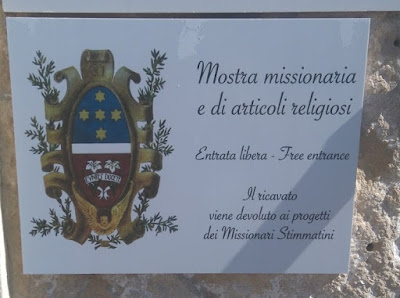