A warm welcome to Viscount Severn

It has just been announced that the Countess of Wessex has given birth to a baby boy; although it has not yet been announced what name might be given to him he will of course be known by the courtesy title Viscount Severn (his father's lesser title).

THE COUNTESS OF WESSEX GIVES BIRTH TO A BABY BOY 17 December 2007  THE FOLLOWING STATEMENT IS ISSUED BY THE PRESS SECRETARY TO THE QUEEN Her Royal Highness The Countess of Wessex today was safely delivered of a baby boy by caesarean section at 4.20pm, at Frimley Park NHS Hospital in Surrey. The weight of the baby was 6lbs 2oz. The Earl of Wessex was present. The Queen and The Duke of Edinburgh, and Mr Christopher Rhys-Jones,  have been informed and are delighted with the news. The medical team attending Her Royal Highness were Mr Marcus Setchell (Surgeon Gynaecologist to The Queen); Mr Gareth Beynon (Consultant Obstetrician/gynaecologist); Dr Abdus Malik (Consultant Neonatologist),  Mrs Grazia Sanar (Neonatal Nurse Practitioner); Dr Claire Edkins (Consultant Anaesthetist) and Mrs Adrienne Price (Head of Midwifery) and Mrs Mandy Kriehn (Operating Department Practitioner). The Countess of Wessex is expected to remain in hospital for the next few days. Their Royal Highnesses already have one daughter, The Lady Louise, who was born at Frimley Park NHS Hospital on 8th November 2003. This baby is The Queen's eighth grandchild, and the eighth in line to the Throne."

The Wessex family (which, rumour has it, may in time become the Edinburgh's) has an heir apparent. Great news.
at December 17, 2007 No comments:

Email ThisBlogThis!Share to TwitterShare to FacebookShare to Pinterest
Labels: Royalty

This wee post is absolutely nothing to do with Cheshire heraldry but touches on my wider interest of heraldry in general and Scottish heraldry in particular. It is appropriate, I feel, that we mark the day: Today, the 14th of December 2007, Robin Orr Blair is due to pack away his personal belongings and leave the offices of the Court of the Lord Lyon at New Register House. I am sure that he will receive a warm and enthusiastic send off.

I cannot bring my readers any news of the appointment of a successor as, to the best of my knowledge, no one has yet been appointed; or at least it might be better to say that there has been no official announcement of an appointment ... yet. I am aware that interviews have been held and rumour has it that there was a short list of three candidates but this is nought more than gossip.

Can there be a period of time where the country (Scotland) is without its chief herald? Are we about to enter an heraldic interregnum?

It has come to my attention that a petitioner who first submitted his petition to Lyon Blair in  November 2004 has just, this very week, received his long awaited Letters Patent (some 37 months later) so it would seem that Mr. Blair will yet be returning to his old offices quite often, and probably for quite a period of time, as tradition has it that he is expected to sign the Letters Patent of those who received a grant of arms under his reign.
at December 14, 2007 No comments:

Six Hatchments and a Royal Coat of Arms - all in a days work!

Yesterday (10th December) I had the pleasure of joining fellow members of the Cheshire Heraldry Society for Christmas lunch. Some eighteen members of the society enjoyed a more than acceptable Christmas lunch at a garden centre on the Staffordshire / Cheshire border after first meeting up at 11 am at the delightful 12th century All Saints' Church at Church Lawton.

This tiny Church, which still retains links with the Lawton family who still hold the patronage of the living, has, for its size, an almost unexpected heraldic display including an 1802 representation of the Royal Arms.

Upon our arrival at All Saints' Church we were greeted by a rather polite but, momentarily flustered, vicar, the Rev Graham L Joyce, who authoritatively asked a number of our party to quickly remove their vehicles from the car park explaining apologetically that he had had occasion to call the fire brigade and was expecting the imminent arrival of a fire engine which would require a tad more room in his minute car park than we had allowed.

Needless to say that for a brief moment a number of us were concerned that our anticipated glee at the thought of seeing the treasures behind the door of his delightful church might be permanently frustrated; could we be about to witness a repeat of the year 1798 when the entire nave of the church was destroyed by fire with only the tower surviving? I am pleased to say (or should that be ashamed to say?) that none of us saw fit to rush forth and rescue those inviting hatchments and were fully content to await the arrival of the professionals!

I am even more pleased to say that our concerns for the well being of the church (and possible guilt over a distinct lack of heroic heraldic rescue plans) were very quickly put to one side when the Reverend Joyce invited those assembled to "please do go into the Church and make yourselves at home, it is much warmer inside than it is out here". Good grief, I thought, if the fire brigade have been called it may well be considerably warmer inside! I was however fully relieved when he went on to say " Oh its alright, a walker passing by reported to me that a tree on a nearby footpath is on fire and that is why I have called the fire brigade". Phew!

Prior to the fire of 1798, tragedy had once before struck the church when in 1652, in early June, the bell tower was struck by lightening during a service and it was discovered afterwards that eleven men who had been in the bell house at the time had all been killed. Yesterday was a damp cold December day and I suspect, though of course do not know, that a burning tree would more likely have been the act of a vandal than that of God. 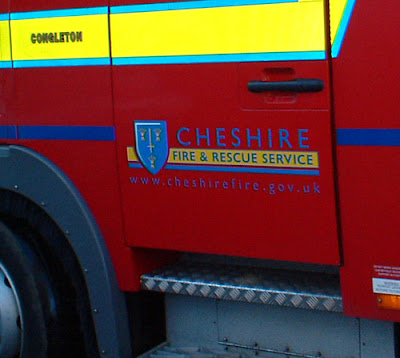 Once inside the Church we were pleased to see six hatchments, an 1802 painting of the Royal Arms, and a small number of plaques and memorials which had some form of heraldic representation though all memorials were of the Lawton family, as would be expected, and of comparatively recent (19th century) date. We asked the very accommodating vicar, who had by that stage composed himself and had been warmed by a cup of coffee,  if he had any information as to whether the fire which consumed the nave in 1798 contained any original hatchments in the hope that it might have had some memorials painted by that renowned local Deputy Herald (or his offspring of the same name) Randal Holmes. Regrettably there was no information as to what might have been lost in the fire; I am convinced in my own mind that it is most unlikely that the Church, with its wealthy patrons, was entirely naked of heraldry prior to the fire and therefore it seems, to me at least, highly likely that a number of memorials would have been lost to us.

I would like to draw the reader's attention to the 1802 armorial bearings of the then reigning Monarch. The Church guide book describes them thus:

" The Royal Coat of Arms which hangs from the gallery is dated 1802 and has therefore been in the church since the reconstruction which was completed that year. The arms are those of King George III and contain a rare feature: in the centre can be seen the arms of Hanover which was included in the British Coat of Arms between the years 1801 and 1816".

To those who make a study of heraldry, the “feature” of the arms of Hanover is perhaps not so rare; however a close study of the arms reveals that the rarity might lie in what could be perhaps a case of ignorance in the way in which a probably English artist has depicted the royal tressure of the Scottish quarter of the arms. If not ignorance, one wonders why the tressure is painted as a square? 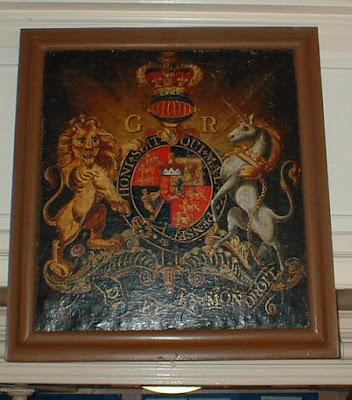 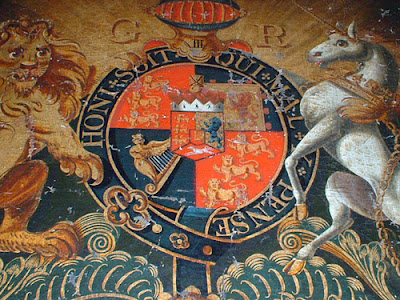 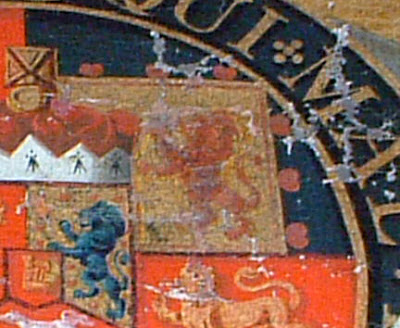 Notice also how the royal lion is quite conveniently (though perhaps incorrectly) moved to one side so as not to be partially hidden by the inescutchion!

I will be uploading the remaining photographs of the hatchments and other heraldic plaques into the Cheshire Heraldry photo gallery as soon as time permits.
at December 11, 2007 No comments: