Well, it finally happened. On the 21st January 2022 the Malta's Chief Herald finally became legitimate and actually now has some legal powers to act. 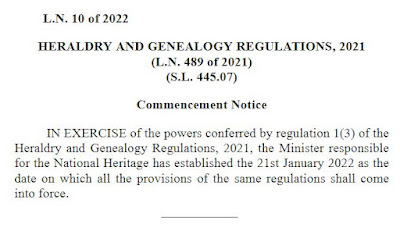 I am, needless to say, delighted that, after being dragged kicking and screaming, Parliament has, at long last (two years I believe), finally granted some lawful authority to Heritage Malta and its Chief Herald. I shall peruse the legislation at my leisure however, to date, I have resisted commenting because, in the only detailed grant I have seen, in that instance at least, the new armiger was Maltese (although in that grant, which may pre-date his authority, he relies still on the unlawful Gazette entry as his authority).

I just hope that the Chief Herald doesn't get his fingers burned by trying to recognise "foreign" titles and nobility. I shall maintain the watching brief but merely as one of the many interested bystanders.

The full document can be found here: https://legislation.mt/eli/sl/445.7/eng