Family and Soul: Memorial, Commemoration and the English Parish Church

The talk, to be given by Dr John Hunt of the Department of History,University of Birmingham is:
Family and Soul: Memorial, Commemoration and the English Parish Church

'Cult of memory' and 'cult of family' form the basis of this lecture, within the perceived continuum of the temporal and spiritual worlds, mutually supportive of each other. It will be primarily concerned with elites in local society, mainly gentry and knightly families, and how they were remembered and commemorated within the context of English parish churches, particularly but not exclusively in the western midlands.

If you can't manage a trip to London in April, why not come to Macclesfield, we are well served by train and we would be delighted to receive your support; this will be an excellent talk by a learned speaker and your opportunity to hear it first.

The meeting will be held at Townley Street Schoolroom, Townley Street, Macclesfield, starting at 2.30 pm, (room opens at 2.00 pm) followed by refreshments. The venue is but a short walk from the Railway Station and there is a Pay and Display car park 100 yds away.
at February 27, 2018 No comments:

It is not unusual, when researching anything heraldic, to come across possible errors which provide a conundrum and last evening, when emblazoning a few more images for the Lancashire and Cheshire Funeral Certificates project, I completed those of Mr. Thomas Case (d. 1634) and his daughter Mrs. Dorothy Coney (also d. 1634/5). The arms of the father were recorded as Argent, on a bend Gules cotised Sable, three round buckles Or and one would expect his daughter, when displaying her paternal arms, to display an identical achievement. It seems however, if we can take the records of the certificates as accurate (and I'm not at all sure that we can), that she had a slightly differenced version, displaying the bend Gules as a bend engrailed Gules. Given that both certificates were completed by Randle Holme at Chester (the one for the father on 26th August 1634 and the one for the daughter the following 26th January 1634/5) can we assume that it was not an error? Is it an error in transcription from the original?

Burke's General Armory records the arms of Case (Ince; and Red Hazels, co. Lancaster, and Thingwall Hall, near Liverpool) as Argent, on a bend engrailed Gules cottised Sable, three round buckles Or - so it may well be that it was either a transcription error or, Randle Holmes recorded it incorrectly. In addition, although the tincture of the sleeve is missing in the certificates record, Burke's records the crest as A cubit arm habited Ermine, cuff Argent, holding in the hand proper, a round buckle Or.

Although the likelihood is that the arms of the father have been recorded incorrectly, I have nevertheless emblazoned both images according to the record published by John Paul Rylands in 1882. 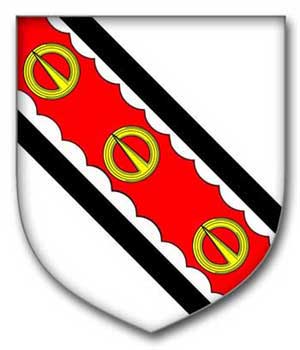 These are the arms of Case. She was the daughter of Thomas Case.

http://cheshire-heraldry.org.uk/funeral-certificates/certificates-8.html
at February 21, 2018 No comments:

http://cheshire-heraldry.org.uk/funeral-certificates/certificates-8.html
at February 20, 2018 No comments:

I have just completed three images for the family of Calveley, those of Sir George Calveley, Knight, Ralph Calveley, Esquire and John Calveley. (John was the son of Ralph and not illegitimate.) 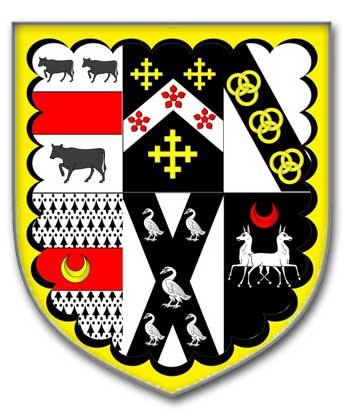 The arms of Ralph Calveley, Esquire, 1619.
Arms: Quarterly of six: 1, Argent, a fess Gules between three calves passant Sable; 2, Sable, on a chevron Argent between three cross crosslets Or, as many cinquefoils Gules; 3, Argent, on a bend Sable, nine annulets, interlaced by threes Or; 4, Ermine, on a fess Gules, a crescent Or; 5, Argent, on a saltire Sable five swans close of the first, a crescent for difference; 6, Sable, two hinds counter-trippant in fesse Argent; a crescent Gules for difference. The whole six quarterings within a bordure engrailed Or.

Ralph, although married with a son and a daughter also had "a base son Hugh Calveley, whom he much affected".

All three examples can be found here:

http://cheshire-heraldry.org.uk/funeral-certificates/certificates-8.html
at February 20, 2018 No comments:

The History of the Ancient Parish of Sandbach


The History of the Ancient Parish of Sandbach 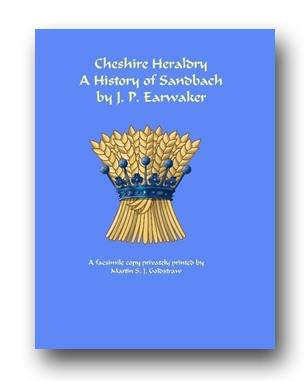 A hardbacked facsimile copy of The History of the Ancient Parish of Sandbach Co. Chester Including the Two Chapelries of Holmes Chapel and Goostrey: from Original Records. First published by J. P. Earwaker for private circulation in 1890 and restricted to 150 copies of which 100 were for presentation. Contains the heraldry and pedigrees of the landowning families of the area.

http://cheshire-heraldry.org.uk/society
at February 12, 2018 No comments:

Further observations on the arms recorded in the Lancashire and Cheshire Funeral Certificates: Bunbury.

In the Visitations (1613) the arms of Bunbury of Stanney are recorded as " Quarterly of four
1 - Argent, on a bend Sable three chess-rooks of the field [Bunbury]
2 - Argent, a fess between three pheasants Gules [Stanney]
3 - Gules, on a bend engrailed, between two cinquefoils Argent, three leopards' faces Azure, a mullet for cadency [Aldersey]
4 - Or, on a chief Gules three trefoils slipped of the field, a crescent Gules for cadency [Bamville]"

In the Funeral Certificates the arms of Sir Henry Bunbury, Knight, died 1634 are recorded as ". Quarterly of six; 1, Argent, on a fess Sable, three chess rooks of the field; 2, Argent, a fess between three pheasants Gules; 3, Gules, on a bend engrailed Argent between two cinquefoils Or, three leopard's faces Vert, a mullet Or for difference; 4, Sable, two bars Argent; 5, Or, a crescent Gules, on a chief of the second three trefoils of the first; 6, Argent, a tree eradicated Vert, fructed Gules."

If only I had the gift of time travel. 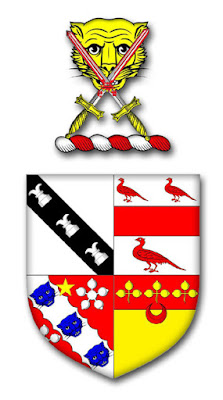 Arms of Bunbury of Stanney (Visitations of 1613)

Latest uploads to the Funeral Certificates project are the Brownes. 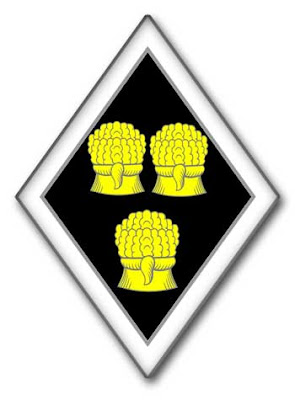 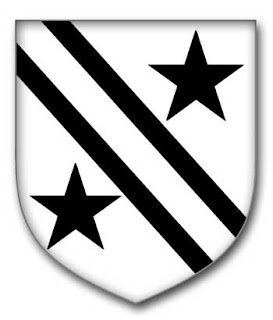 Crest: On a mound Vert, a lion sejant Argent, vulned in the shoulder proper.

http://cheshire-heraldry.org.uk/funeral-certificates/certificates-7.html
at February 11, 2018 No comments: 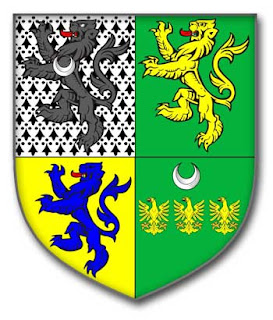 http://cheshire-heraldry.org.uk/funeral-certificates/certificates-7.html
at February 11, 2018 No comments:

http://cheshire-heraldry.org.uk/funeral-certificates/certificates-6.html
at February 10, 2018 No comments:

Sir Richard Brooke, knight, 1632.Arms: Quarterly, 1 and 4, Or, a cross engrailed per pale Gules and Sable; 2 and 3, Argent, a chevron Sable between three buck's heads cabossed Gules. Over all a crescent for difference.

Crest: A brock or badger proper. 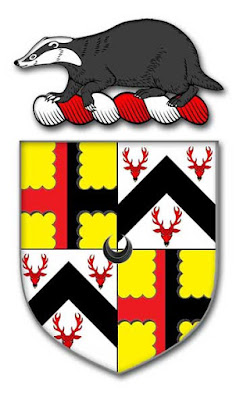 http://cheshire-heraldry.org.uk/funeral-certificates/certificates-6.html
at February 10, 2018 No comments:

I have had sight of a letter dated 23 October 2017 addressed to a learned solicitor. I feel justified in passing on its content as the Lord Lyon concludes his letter with the statement “Please feel free to circulate this letter to interested parties.” It would seem to me that all enthusiastic followers of Scots heraldry and the workings of the Lyon Court easily fall into the category of interested parties all be it that they are not parties to the purchase of a barony and wanting to petition for arms based upon said purchase..

“Letters Patent and Feudal Baronies
I have been reconsidering the wording relating to feudal baronies contained in Letters Patent. As you will be aware my function is to grant arms and the ownership of a barony is seen as sufficient to establish jurisdiction for me to grant arms. This will continue to be the position.

However, I have decided that from 1 January 2018 any application before me based on the ownership of a barony will no longer make any reference to the Deed of Assignation, transferring the barony.

The Letters Patent will simply state the petitioner “being within the jurisdiction of the Lord Lyon, King of Arms – he assigns Armorial Bearings”.
Please feel free to circulate this letter to interested parties.
Yours sincerely”

What is unclear, to me at least, is the reason why Lyon has changed his mind about naming the barony in Letters Patent and it is doubly unclear to me how an “Answer to a Petition” ( Menking 2014) can be published by a Judge, who ranks equally with a Court of Session Judge, and then have that decision negated by a single letter to a solicitor. This has thrown me into some confusion as to the status of an “Answer to a Petition”; is it a Judicial document or an administrative document? Clearly if it is the former then it requires a judicial procedure to set it aside and if it is the latter then surely an aggrieved party would have a right for the administrative procedure to be explained and justified by the administration. To quote one interested party, “It is not our tradition in the United Kingdom to be ruled by dictat!”

Perhaps, in the near future, there will be some sort of challenge or further questioning of the decision set down in the letter? Perhaps it will be accepted without question, who knows? Will the assignment of the baronial helm also now quietly disappear? Will new, post January, armigers who qualified by way of ownership of a barony (as they still will qualify) simply adopt the baronial helm as befitting their degree regardless?
at February 05, 2018 No comments: