A dream which turned into a nightmare. Since this article was published, the owner of the castle placed himself into bankruptcy and late last year the castle was offered for sale, by the joint receivers, for offers over £2M with sealed bids. Whether or not it was sold I have no idea but it begs the question why on earth would anyone want to buy it with so many prohibition notices slapped on it!

This article can be found in the Staffordshire Evening Sentinel (full credit to them for all images etc.]here: https://bit.ly/3aeaCFR 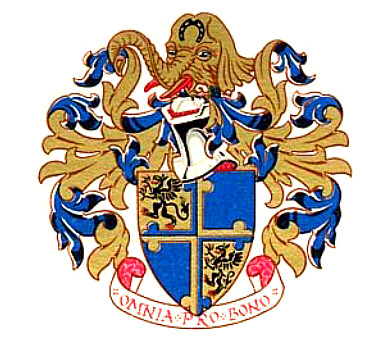 The Institute of Heraldic & Genealogical Studies, which he founded, has today announced the death of Cecil Humphery-Smith OBE : https://www.ihgs.ac.uk/news-cecil-humphery-smith-obe-2021-01-19

Cecil R.J. Humphery-Smith had a wide and varied experience of studying British ancestry in the UK, and throughout Europe and overseas over more than 60 years, Cecil R.J.Humphery-Smith instructed classes for London University for some forty-five years, producing certificate, advanced and diploma courses. In 1957 he introduced the concept of Family History and the British Vital Records Index.He had also taught courses for the Oxford University Department for Extra-Mural Studies and subsequently for the University of Kent School of Continuing Education. He also lectured and broadcast on radio and TV widely abroad in North America and in Europe.As Principal of the Institute in Canterbury he established a successful correspondence course and graded assessment examination structure which enjoy world wide recognition and acclaim. These examinations lead to accredited diploma and licentiate awards.He was involved with the following organizations:

Following post-doctoral research on antibiotics as a biochemist he spent some twenty years in the field of food quality control whilst also studying archives and lecturing on subjects auxiliary to history for London and other Universities (1951-1996). With heraldry as a hobby since childhood, he established the first School for Family History Studies in 1957 and in 1961 founded the Institute. He was appointed a Vice-President of The Cambridge University Heraldry Society in 1954 and is closely associated with several other national and international organisations in the field. Avid Bergman laureate and d'Altenstein Prize for heraldic studies (1961). Prix Dalenda for medieval studies (1995) and Gustav von Numers prize for portfolio of heraldic art and design (1996). Freedom of the City of London since 1967, he was liveried of the Broiderers Company and Scriveners Company (Court member and honorary historian). Knight of Obedience, Order of St John, SMOM. Fellow of the Society of Antiquaries and several other societies in the fields of study internationally. A frequent broadcaster on radio and previously on television, he was the author of many books, standard reference sources and numerous learned articles.Mr Humphery-Smith was appointed an Officer of the Order of the British Empire (OBE) in the Birthday Honours List, 2004.

[Obituary courtesy of the International Association of Amateur Heralds]