Pseudo heraldry for a new beginning.

Some time ago I reported my sadness at the likely consignment of the arms of Cheshire County Council to the dustbin of history following the demise of that authority which is due to take place at the end of this financial year. It was both a rant and a plea; it comes as no surprise that neither the rant nor the plea had any effect.

On the first of April the two new unitary authorities come into their own; both have been busy in their preparation and, as you would expect, their efforts to impress the world with some form of corporate identity has not escaped my attention.

It seems that both soon to be authorities chose what they considered to be the most economic route to a corporate identity and, probably motivated by a need to ensure that there were no accusations of throwing away yet more taxpayers money, avoided all association with those dreaded, and expensive, “design agencies”.

Cheshire East, the new authority that replaces the County Council and the Boroughs of Crewe & Nantwich, Congleton and Macclesfield decided to remain “in house” and used its own design team to whittle suggestions down to three options before going out to public consultation. Finally unveiled on the 16th September 2008 their new logo has little to interest the reader of this web log but its owners feel that it is a “fantastic design” with a “professional, clean and smart” look. At least it is honest in that it is simply a logo and makes no pretence to heraldry (which is more than can be said of its new sister authority!).

I have no doubt that somewhere in the documents which sold the concept of unitary authorities to the powers that be there will be mention of fiscal savings. It is interesting to note that a budget of £250’000 has now been set aside by Cheshire East Council to roll out the new logo across over 200 buildings , 160 play areas and 400 vehicles.

Whilst the new Cheshire East logo has no pretensions to grandeur and thus can be treated as being an honest attempt at branding, the same can not be said of the device adopted by the council set to replace the boroughs of Ellesmere Port and Neston, Vale Royal and Chester District. The new Cheshire West and Chester Council also chose to eschewed any contracts with those dreaded “design agencies” but took an altogether different route and turned the design process into a competition with a prize of £500 to the winner.   After a short list of four was presented to the public for their final consultation, some of which, resembled building society fascias, the newly adopted device for Cheshire West and Cheshire Council was announced on the same day as the one for the other new Cheshire authority.

The logo, designed by City Council employee Chris Hughes, is said to represent the new authority as being “dynamic, forward thinking, inspiring and professional, fresh and innovative”. That it may be - but for me, it simply pretends to be something it isn’t; just like the previous logo of the soon to be extinct Cheshire County Council did.

“The lion is a common symbol in Cheshire, stemming from the mid 1500s and the wheat sheaf motif is carried on the crests of the councils that will form Cheshire West and Chester.”

I will ignore the common misconception that a shield is a crest (groan) and simply point out that the designer has taken elements from historical Cheshire heraldry, thus subconsciously recognising that heraldry has and does play an important part in the identity of Cheshire, and yet has not had the courage to suggest that these elements should be given life in the form of Letters Patent from Her Majesty's Officers of Arms. The new authority can not be congratulated on adopting something which, as a design, purports to be representing the heraldic tradition of a proud county and yet which is not a coat of arms and does not have the authenticity of a grant of arms. What can not be avoided is that it pretends to be a coat of arms but it is not. That is a shame.
at March 25, 2009 No comments:

I would be grateful for information of the whereabouts of a copy of small booklet entitled The Heraldry of Cheshire by Harold Ellis Tomlinson, published in 1946 by Manchester University Press (Manchester); it was, I believe, reprinted from the "Bulletin of the John Rylands Library", vol. 30, no. 1, October, 1946.
at March 25, 2009 No comments:

I am plodding away at the revised images and have reached Brereton of Malpas. 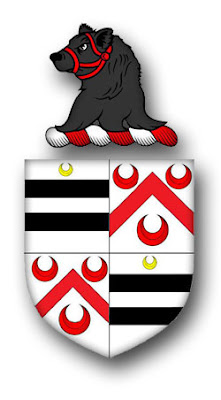 Brereton of MalpasArms: Quarterly 1 and 4 Argent, two bars Sable, a crescent for difference Or.
2 and 3 Argent a chevron between three crescents Gules [Ipstones]

The images shown on the website are smaller than those in the book.
at March 21, 2009 No comments:

I hesitate to say that I have just finished reading because that would be inaccurate but I have just spent the best part of a fortnight pleasurably trawling through a superb and enviable record of Derbyshire arms compiled by Maxwell Craven. I thoroughly recommend it and quote below the information given on the book by The Derbyshire Records Society who published the book:

This book is the only comprehensive dictionary of Derbyshire coats of arms. It contains some 2,500 entries, arranged alphabetically by surname. In each case, the parishes within the county with which the family in associated are listed, followed by a descrip­tion of their arms and an outline of their family's history. For many families, several variant coats are described. For every entry, references to sources are given. A representative sample of eighty coats of arms are illustrated in the text with specially prepared line drawings. An exceptionally comprehensive index of place names completes the volume.

I'm not a member of the Derbyshire Records Society so I enquired as to availability from some of my other sources and managed to obtain a new copy for a lot less than the records society was asking from none members. I've used Chapel Books on a few occasions now for books and manuscripts and they always come up trumps.

The beauty of this book is not its illustrations, there are very few of them and they are in black and white, but in the scholarly research and accurate notation of source. I especially like the way in which it refers to a family as bearing an achievement where it has some official standing  whereas one without such authority is referred to as simply being used by the family. I hasten to add that, of course, the book is all about the arms used in an English county and such terms are probably best thought of as in an English environment.
at March 13, 2009 No comments:

I haven't spent much time on the Cheshire Heraldry web site lately. This is mostly because I have to earn a living but when I do get time to indulge my hobbies I have been re-jigging all the images to put into what hopefully will be an illustrated companion, in book form, to the Cheshire Visitations. I have been ably assisted over the years by a number of friends who have been kind enough to proof read the blazons and check the emblazonments but I am still finding mistakes.

I include one such example below for your amusement. Quite apart from the unfathomable reason why I chose to ignore the usual white and yellow for Argent and Or, some of my early mistakes are almost inexcusable. When you look at the example below please bear in mind that the first image was completed over a decade and a half ago. I've put the blazon underneath so you can see where I went wrong. My excuse is that I did many of the images in a rush and you can't proof read your own work. The wolf in the original image was blazoned correctly according to the original blazon but I find, upon checking, that it should have been salient and not sejant!

1.  Sable, a fesse humette Argent, a crescent for difference.
2. Or, a bend Azure [Vernon].
3. Quarterly Or and Gules, a bend Sable [Malbank].
4. Azure, three garbs Or [Randolph Blunderville].
5. Gules, a lion rampant within a bordure indented Or. [Dee].
6. Vert, a bend Ermine. [Wettenhall]
7. Argent, a scythe erect Sable. [Snelstone]
8. Azure, three fishes, two in chief and one in base, their heads meeting in the fesse point Argent. [Troutbeck?]
Over all an escucheon of pretence, per pale Gules and Azure, a wolf salient Or. vulned in the shoulder proper. [Hancky]
Crest: An heraldic antelope passant Argent, armed, mained and tufted Or, a crescent for difference.
at March 09, 2009 No comments:

I touched on this difference during my September talk where I illustrated the arms of Winnington and their Leftwich descendants.

The Winnington blazon is recorded as being an orle, that of Leftwich is an escutcheon voided. In the illustration above they look the same.
Definition of an orle: Like a bordure but not reaching the edges of the shield.

The blazon of the Winnington arms (Visitations) states “an orle” – which – when illustrated on a shield looks like an escutcheon. However, in the illustrations of a quartered shield as shown above perhaps an orle ought not to look like an escutcheon but follow the edge of the shield. Imagine an orle on a banner; it would be rectangular and look nothing like a voided shield.

Above is an example of how an orle should be illustrated on a quartered shield when following the definition "like a bordure but not reaching the edges of the shield".

The armorial Bearings of Birchells of Birchells per the Visitations of Chester. I made this illustration for a talk I gave to the Cheshire Heraldry Society in September 2008. I can not identify the 2nd and 3rd quarters. Any ideas?
at March 04, 2009 No comments: