Lesson for the day.

Lesson for the day - the bordure.
I am coming across an increasing number of " amateur heralds" who, whilst having competent digital/drawing/painting skills appear to be quite ignorant of blazon and, for that matter, the science upon which heraldry is founded; many of them appear to have their own idea of what a coat of arms is but don't appear to have ever read a heraldry book.

I don't wish to come over as too critical of these newly minted heralds, we all have to start somewhere, but I do wish that some basic research could be done first before offering to design arms for all and sundry. Many here would be delighted to advise but it isn't difficult to do some basic research and many heraldry books are available free to download.

Perhaps here I should disclose the basis for my "rant". Not for the first time have I been approached, with a request to supply a blazon, by someone who has had a coat of arms designed for them without its necessary heraldic description. Sometimes, the "arms" are completely inappropriate and on many occasions not even particularly heraldic. The latest conversation with such an armiger revolved around the decorative border around the shield applied, by the artist/designer. When I failed to mention it in the blazon, the new armiger asked why I had omitted it, at first believing that I must have overlooked it!

It took quite some time to convince Mr. new armiger that In heraldry, a bordure is a band of contrasting tincture forming a border around the edge of a shield, traditionally one-sixth as wide as the shield itself. It is sometimes reckoned as an ordinary and sometimes as a subordinary. There are no diminutives of a bordure and so the narrow line around the shield that had been depicted on his arms is nothing more than artistic embellishment and therefore can not be a part of the blazon.

He sent me an image (I regret that I can't acknowledge its source) which simply reinforced my view. The narrow borders around these shields are simply artistic embellishment and not a part of the blazon. He has been mislead into believing that the wee border is to be a permanent and inheritable part of his arms despite the fact that heraldry is a science and fimbriations to a shield are meaningless. 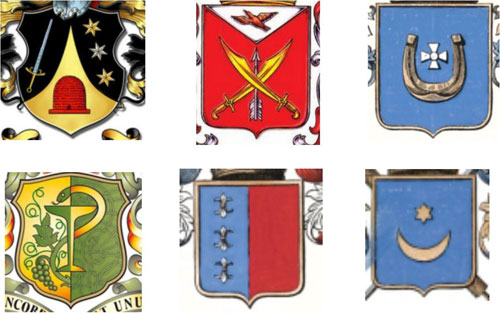