Not quite a case of "apply within" but the retirement of the present Lord Lyon, Robin Orr Blair, which has for some time now been the subject of rumour and speculation (see my previous post here) has now been confirmed by way of a press advertisement published in the Scottish press on Friday the 14th September.

Prior to the twenty-first century the office had never before been publicly advertised and yet this century, still in its infancy, has already seen for the second time the possition of the Lord Lyon King of Arms advertised in the press. Robin Orr Blair was the first to take on the roll of Lyon in this new century though his roll had sadly been reduced to that of a part time King of Arms. Part time he may have been but he was quick off the mark to reward himself with the addition of supporters to his armorial achievement, something his immediate predecessors in title had not felt the need to do.

Those who wish to apply for this ancient and prestigious post must get their applications in before the closing date of the 5th October and our sources tell us that Lyon Blair intends to clear his desk by the 12th of December. He leaves his successor with quite a workload and it is interesting to note (if indeed he is going on that date) that had he remained in post a little longer he would have had yet another case of appeal/judicial review against him to answer in the Court of Session the very next day ! One hopes that the appellant is not too inconvenienced by the change in office holder though it does beg the question what the view of the new Lyon might be on some, or all, of the contentious decisions taken by the present Lyon. 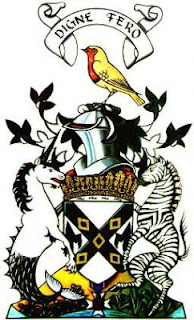 Lyon Blair has had quite a tough time of it really. He came into office in 2001 not as a full time Lyon but in a seemingly reduced roll and almost immediately walked into the brewing storm created by the Abolition of Feudal Tenure Act (2000) which came into effect in November 2004. Even if for the moment we set aside the legal challenges he has had to face (and is still facing) resulting from this Act, Lyon Court has had to deal with a large rush of applications from new made barons anxious to meet the deadline given by the Lord Lyon whereby they could be assured of receiving their baronial additaments before he bolted the door shut under the terms of the AFT act. This baronial rush created an almost unprecedented backlog of work and the writer knows of one non baronial petitioner who is still awaiting the receipt of his letters patent almost two years after his petition hit the desk of Lyon Blair. It is fortunate that those in the queue are patient.

Lyon Blair may be clearing his personal desk on the 12th December but the desk of the Lord Lyon will remain burdened for quite some time. I am informed that prior to the appointment of Lyon Blair in 2001, the Courts of Session saw appeals from the Lyon Court (or Judicial Reviews from a ministerial Lyon) once in every couple of generations. The present incumbent has seen, on average, at least one case instituted in the higher courts against him every year of his office and I do not believe that he has enjoyed success in any of them. He leaves his successor with one case involving three appellants awaiting conclusion and another scheduled to kick off on the day after he is rumoured to be leaving office.

His successor will undoubtedly want to put his own mark of authority on the office and somewhere out there there will hopefully be an applicant with a clear idea of what the future of the post should be. It is a pity that he will be taking over half way through a number of legal appeals against his predecessor.

For those who have an interest in the vacancy I copy below the content of the advertisement:

OFFICE OF THE LORD LYON KING OF ARMS: INFORMATION TO APPLICANTS

Her Majesty the Queen appoints the Lord Lyon, on the recommendation of the First Minister, under the terms of Section 3 of the Lyon King of Arms Act 1867. The Court of the Lord Lyon is the heraldic authority for Scotland. It deals with all matters relating to Scottish Heraldry and Coats of Arms and maintains the Scottish Public Registers of Arms and Genealogies. The Lord Lyon is also responsible for State Ceremonial in Scotland.

The Lord Lyon’s judicial functions include ruling on whom has the right to bear an existing coat of arms and the authorisation of matriculation of differenced arms. The Lord Lyon’s administrative functions include the granting of armorial bearings to individuals and to corporations. Applications are not restricted to persons or organisations in Scotland and the Lord Lyon often considers applications from other countries. The Court and Office of the Lord Lyon is based in New Register House, Edinburgh. The Lyon is assisted by the Lyon Clerk, who holds a separate Royal Commission, and by two administrative staff.

Salary and Conditions of Service

The salary of the Lord Lyon is linked to pay bands for the Senior Civil Service and the office attracts a pension under the terms of the Principal Civil Service Pension Scheme. The post may be held on a part-time basis, with a minimum of 3 days per week. As an independent officeholder, attendance will be a matter for the Lord Lyon to determine, subject to the particular demands on the Office at different times of the year. Details of the salary and pension package will the subject of negotiation with the successful applicant.

The successful candidate will require to be legally qualified. Candidates who reach the final interview stage will be expected to possess, and demonstrate, the following characteristics:

Sufficient relevant legal experience to act in a judicial capacity;
Experience of ceremonial aspects;
A knowledge of heraldry and genealogy;
The ability to manage the business of the office of the Lyon Court;
A sense of the history and position of the Office, combined with knowledge of Scottish Society and diplomacy to ensure that the Court of the Lord Lyon continues to operate efficiently in modern circumstances.

All candidates must complete the application form, which accompanies this information note. An independent selection panel will consider the written applications before inviting a short-list of candidates for interview in Edinburgh. The panel will then make a written report, with recommendations, to the First Minister.

Unidentified Faxes part two and a plea for the common crest.

My friend the unidentified fax sender has struck again. It would seem that he does not read my web journal.

This time I have been sent a fax of two pages from the web site of the Standing Council of The Baronetage .

Clearly my friend has internet access. Why he could not simply email me the link I do not know; the point of his expenditure (cost of the fax call) is somewhat lost on me anyway as there is never any accompanying letter setting out why my friend felt that it is so important that these pages are brought to my attention.

Oh well, while we are on the subject of baronets (perhaps my friend is a mind reader?) I will mention that whilst browsing through Debrett's of 1980 vintage looking for Cheshire baronets (that is to say baronets with Cheshire connections) I came across the record for Haworth, Creation (U.K.) 1911, of Dunham Massey, co Chester.
Arms: Azure, on a bend between two stags' heads couped Or, as many garbs Gules.
Crest: Issuant out of grass proper a stag's head Gules armed and collared with a chain Or.
The illustration reminded me of the brief paper I wrote on recently for the newsletter of The Armorial Register entitled "A left handed baronet - or chicken and egg." In the case of Haworth, the baronet's crest features a stag's head Gules and is illustrated on the Debrett's page thus: 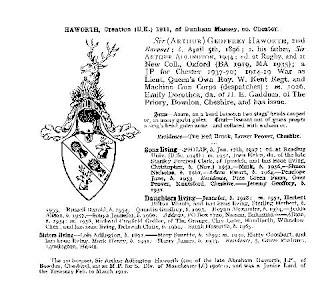 Why, I wonder, was it so illustrated?

I can guess. When a shield is emblazoned, the charge blazoned as a stag's head would, by default face to the dexter (to the left as we look at the shield) and therefore this is how the charge on the crest has been illustrated. I would bet that had the blazon been a stag's head affrontee the artist would have drawn it facing front but this is where I make my plea. Crests are three dimensional things; they are not flat charges painted onto a shield.

Let us imagine the resultant image had the Haworth baronet been of no greater degree than gentleman or esquire; I have absolutely no doubt that the artist would have drawn the crest in this way:

Note that when the stag's head is drawn by default facing to the dexter and placed on the helm of an esquire, it actually faces to the front of the helm. So, bearing in mind that a crest is a three dimensional thing, when, upon elevation to the baronetage, we naturally turn the helm to the front, why on earth don't we also just turn the crest to the front like this?

Surely when we imagine the "real life" of a crest as worn on a helm in tournament, most, if not all crests would have had a natural orientation to the front?
at September 10, 2007 No comments: