I have just heard the very sad news that Harold Storey, who was for many, many years, Chairman of the Cheshire Heraldry Society, had died in Stepping Hill, he was 92 with a heart problem & Bronchitis.

The funeral is in Thursday 5 September at All Saints Church, Church Road, Cheadle Hulme, SK8 7JL at 2.15pm for 2.30pm. If you wish to attend, it has been suggested that you park on Hill Top Avenue as Church Road is very busy.

Afterwards there is to be a wake at The Deanwater, Woodford SK7 1RJ. It is 3.5 miles away & takes 8 mins according to AA Route Planner. It is off a big lay-by with a big car park at the back of the hotel. There is a pedestrian entrance at the back. 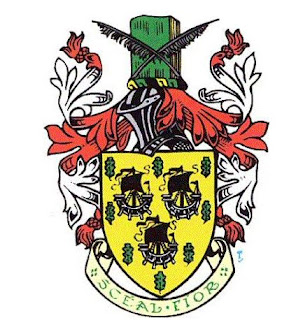 
Posted on behalf of The Mortimer Society: The Mortimer History Society and the Friends of Ludlow Museum are pleased to present The Ludlow Castle Heraldic Roll: A Mirror into Tudor Times a joint conference to be held in Ludlow Methodist Church on Saturday 5th October

In 1574 Sir Henry Sidney, Lord President of the Council of Wales in the Marches, set up 46 coats of arms in the round chapel in Ludlow castle. These included previous owners of the castle, previous lords president, and all 22 current members of the Council. This collection of arms was substantially added to, over the years, and were still around in the 18th century when Mytton recorded them. Unfortunately, they subsequently disappeared completely and we were just left with Mytton's descriptions.

What none of us realised, however, is that Sir Henry had all the original coats of arms copied onto a roll of parchment and, quite fortuitously, we "discovered" this roll in 2015. Following an appeal, the roll was purchased and conserved; excellent paper copies have been made and much research has been done on the heraldry, on the people and on the roll itself.

At this conference we will be telling the story of the roll and setting it in its Tudor context. The roll itself will be on display and we are expecting that the book we've written about it will be published in time.


For full details of the conference and how to book go to mortimerhistorysociety.org.uk/index.php/2019-roll or telephone Philip Hume on 01584 831654.