An Obituary by Gordon Caseley

Lord Lyon Sir Malcolm Innes of Edingight maintained the position of Scots heraldry as the purest and finest in the world, developing a modern matrix envied by heraldically developing nations such as Canada, Finland and South Africa. When breaches of heraldic law occurred, his was the swift hand in correction.

When the first British Airways flight into Edinburgh boasting a new coat-of-arms on the tail, Lyon Innes firmly informed BA that they were employing arms not legally recognised in Scotland. BA speedily matriculated their arms in Scotland to satisfy Scots law.

The cliché of “the Lyon’s den” was anathema to the modernising Sir Malcolm. While enforcing centuries-old heraldic law, he ensured that legislation met current standards, presiding as a judge of the realm in the only country where a court of heraldry and genealogy is fully integrated into the judicial system.

He appointed the first woman herald in the world in 1992, a move so far copied only by Canada and Ireland. Thus the heralds on duty at the first opening ceremony of the Scottish Parliament in 1999 proved gender balance in an era before the term ever entered common parlance.

His reign (as the term of office of a Lyon is quaintly termed) oversaw the introduction of heraldic charges (the devices on shields) to cope with late 20th century needs such as computing and electronics, a period by which time he had long been familiar with heraldic use representing DNA and space travel.

He encouraged a move away from Latin as a base for mottoes, suggesting that a language relevant to the petitioner for arms be considered. His father Sir Thomas had as Lyon in 1956 granted Shetland Isles Council the motto in Old Norse “Med Logum Skal Land Byggji” (By law shall the land be built up). Thus in Sir Malcolm’s time came mottoes in English, Greek, French, Welsh and several Asiatic tongues. He took particular interest in the use of Scots, with “Leal” (True-hearted) being granted in 1987 – the shortest motto in Scots of all time. His example encouraged his Lyonic successors. Thus Aberdeen and North-East Scotland Family History Society bears the Doric motto of “Aye Tyaavin Awa”.

Third son of Sir Thomas Innes of Learney, redoubtable Lord Lyon for nearly a quarter-of-a-century from 1945, and his wife Lady Lucy Buchan, Malcolm Rognvald Innes grew up steeped in heraldry and armory. At Edinburgh Academy age 10 in 1948, he saw service as a Lyon Court page, and while still at Edinburgh University in 1957, he gained the appointed of Falkland Pursuivant Extraordinary.

A non-heraldic memory was that so little alcohol was ever served in his boyhood home near Torphins, Aberdeenshire, that the young Malcolm grew up believing that whisky was solely to counter wasp and bee stings.

Learning and authorship saw his rapid rise through heraldic ranks, being appointed Lord Lyon in 1981, the 35th Lyon since Henry Greve (Greve) in 1399, a position with origins in the seannachie of Celtic kings.

Aware that heraldry could become stultified, he readily acted on a suggestion in late 1976 by heraldist Charles Burnett (later himself a distinguished officer of arms) to form an association for the study and use of heraldry. In February the following year, he started out as first chairman of the Heraldry Society of Scotland, today an active grouping with some 400 members.

Of early society days, he recalled: “We went on many wonderful (heraldic) excursions, fortified with good picnics and bottles of decent wine. In those days, I was described by Lady Olga Maitland in her column (in the Daily Express) as “a robust partygoer!”.

In a lecture to the society, Sir Malcolm predicted heraldry in globalisation would increasingly occupy a role in preserving identity for the individual and family, and for institutions local and national. Adding that the desire for individual identity ran very deep in Scotland, he invoked his famously dry wit, turning for authority to his wife’s hairdresser, this lady informing Lady Innes that Edinburgh’s “leading tattoo parlour” never applied exactly the same tattoo to customers. “Each pattern is absolutely individual”, she said.

As Lyon, Sir Malcolm was responsible for several far-reaching decisions on the laws of arms, passing judgement on numerous claims and disputes on the succession to titles and chiefships, including the Earldom of Annandale, the Lordship of Borthwick, and the Dunbar of Mochrum baronetcy

His extensive writings included a revised edition of Scots Heraldry, from the original written by his father. Heavily involved in Scots culture and history, Sir Malcolm was a founder and later president of the Scottish Genealogy Society, and an active past president of the Royal Celtic Society

Essentially modest and never one to seek the limelight, Sir Malcolm welcomed visitors of all distinction and none to Lyon Office. Many an intending armiger (owner of a coat-of-arms) has benefitted from his kindly intervention in heraldic design. He retained the dignity of his ancient office while leaving admiration of the majesty of it to others.

Sir Malcolm, 16th laird of Edingight in Banffshire, was appointed CVO in 1981, and promoted KCVO nine years later. He died of cancer, and was predeceased in 2013 by his wife of half-a-century Joan Hay, scion of the Tweeddale Hays. He is survived by his three sons, John, now 17th of Edingight; Michael of Crommey; Colin of Kinnairdy; and eight grandchildren ranging in age from seven to 24.

The Booths have been in the news recently.

Of some Cheshire interest is the fact that Dr Claire Booth (aka Lady Ulster) is descended from the Booths of Twemlow. Lady Ulster is the the elder of two daughters and therefore a co-heiress, meaning that Booth arms will eventually be quartered with the Royal Arms (differenced for Gloucester, D).

While we're on the subject of the Booths, the January 2020 Newsletter of The College of Arms records the grant of arms, crest and badge to BOOTH, Edwin John, of Osbaldeston, Lancashire, CBE, DL. Garter and Norroy and Ulster Kings of Arms. 6/11//2019. College reference: Grants 182/209.

Sadly, as usual, there is no further information so we can only speculate as to the blazon. This is a grant of arms to Edwin Booth of supermarket-fame (he's adopted).

Way back in August 2008 I wrote about revising the image of the arms of the Booths of Allerton Beeches for Burke's Peerage but it seems that the present owners of the Burke's brand are now considering a further print volume and they are requesting non digital images; not quite sure how I'll deal with that one and I'm not quite sure how the general peerage/baronetage will react to such a request. I'll give it some thought.

Meanwhile, the photo below was kindly sent to me by Richard Adamson and it records the visit to the UK, in autumn last year, of Sir Douglas Booth Bt. It was taken in Lincolns Inn. 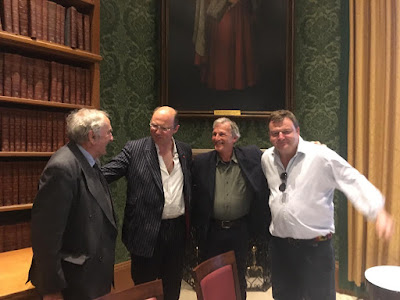 From Left to Right.
Dr. Donald Adamson (Richard's Father), Mark Watson-Gandy (Richard's Cousin),
Sir Douglas Booth and Richard Adamson.
In case you're wondering, the Adamsons are related to the Booths and I've worked with Richard on a couple of heraldic projects (it was Richard who asked me to update the Booth arms for the Burke's entry back in 2008).

[According to Wikipedia] The Booth Baronetcy, of Allerton Beeches in the City of Liverpool, was created in the Baronetage of the United Kingdom on 24 January 1916 for Sir Alfred Allen Booth, a Director of Alfred Booth and Company and Chairman of the Cunard Steamship Company. He was a member of a cadet branch of the ancient Cheshire family, being descended via the Booths of Twemlow. The title is held by his grandson, Sir Douglas Booth, 3rd Baronet, who succeeded his father in 1960. He is a television and film writer living in the United States with his wife and two daughters. The eminent Victorian social researcher and philanthropist Charles Booth, uncle of Sir Alfred Booth, 1st Baronet, much to Gladstone's dismay, declined a seat in the House of Lords as a Viscount. Dr Claire Booth, wife of Alex Ulster, also descends from this family.

Email ThisBlogThis!Share to TwitterShare to FacebookShare to Pinterest
Labels: Heraldry, Odds and bobs

Here is a flyer a flier from the authors about a new volume in the series "Heraldry in Norfolk", covering the Fincham area in the west of Norfolk. 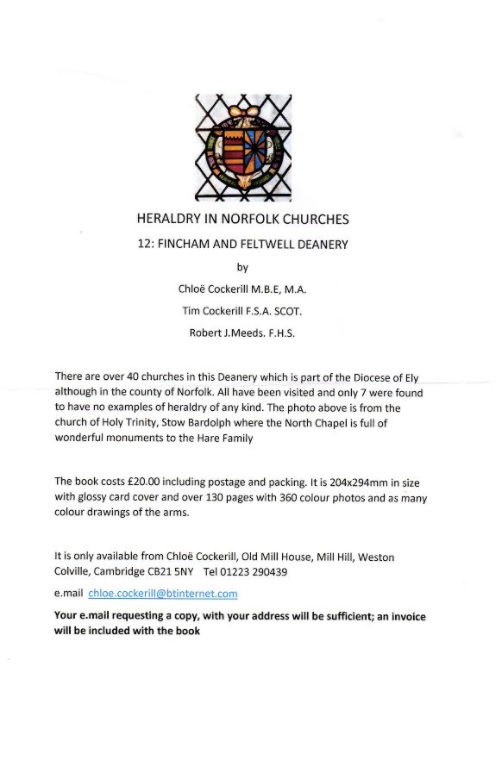