Some time ago I was asked to rejig the image of Leigh of West Hall, High Legh for inclusion in the online Burke's Peerage and Gentry and readers of this weblog may remember various Leigh discussions.

I am pleased to report that the image has been included in the new Leigh entry: 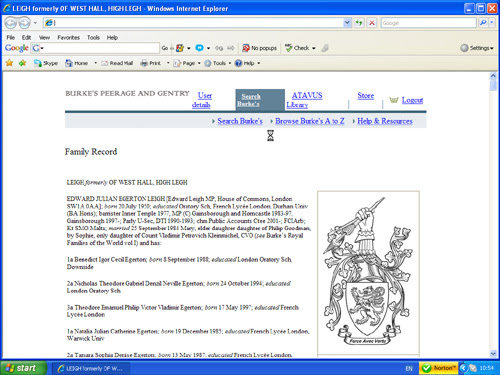 Not a grant of arms, although described as such, the Letters Patent of Thomas Pemberton-Leigh, Baron Kingsdown are presently being offered for sale on eBay. 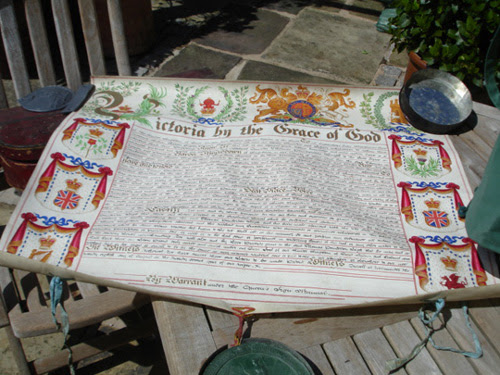 The seller provides the following information on the grantee and there is of course a Cheshire connection:

He was called to the bar at Lincoln's Inn in 1816, and at once acquired a lucrative equity practice. He sat in the Parliament of the United Kingdom for Rye (1831–1832) and for Ripon (1835–1843). He was made a King's Counsel in 1829. Of a retiring disposition, he seldom took part in parliamentary debates, although in 1838 in the case of Stockdale v. Hansard he took a considerable part in upholding the privileges of parliament.

In 1841, Pemberton accepted the post of attorney-general for the Duchy of Cornwall. In 1842 a relative, Sir Robert H. Leigh, left him a life interest in his Wigan estates, amounting to some £15,000 a year; he then assumed the additional surname of Leigh. Having accepted the chancellorship of the Duchy of Cornwall and a privy councillorship, he became a member of the judicial committee of the privy council, and for nearly twenty years devoted his energies and talents to the work of that body.

His judgments, more particularly in prize cases, of which he took especial charge, are remarkable not only for legal precision and accuracy, but for their form and expression.

Between 1854-1858 the Thomas Pemberton Leigh acted as the law officer representing the Duchy of Cornwall in the Cornish Foreshore Case - a case of arbitration between the Crown and the Duchy of Cornwall. Officers of the Duchy successfully argued that the Duchy enjoyed many of the rights and prerogatives of a County palatine and that although the Duke of Cornwall was not granted Royal Jurisdiction, was considered to be quasi-sovereign within his Duchy of Cornwall. The arbitration, as instructed by the Crown, was based on legal argument and documentation which led to the Cornwall Submarine Mines Act of 1858.[1]

In 1858, on the formation of Edward Smith-Stanley, 14th Earl of Derby's administration, he was offered the Great Seal, but declined; in the same year, however, he was raised to the peerage as Baron Kingsdown.

He died at his seat, Torry Hill, near Sittingbourne, Kent, on 7 October 1867. Lord Kingsdown never married, and his title became extinct. Torry Hill stayed in the family, later known as the Leigh-Pembertons. Torry Hill was rebuilt to a Georgian design in the 1960s and only a Victorian gate-house remains on the estate. It is now a home to a new Lord Kingsdown, a life peer who is also a lawyer, country gentleman and former governor of the Bank of England."

A quick look at Burke's General Armory and the arms of (the original) Lord Kingsdown are revealed:

I have recently engaged Roddy Young to make me a bonnet badge and today he kindly sent me a photo of his carved sculpture from which the mold of my crest will be made. 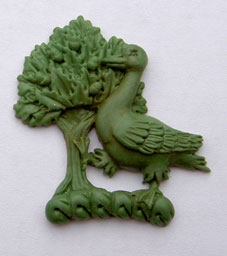 I hope to be able to make regular progress reports on my weblog as the making of the badge progresses.
at June 05, 2008 No comments: