The grant of arms of Geoffrey Frank Pearce fell under the eBay hammer on the 22nd of this month fetching £270. Described as "a grant of Arms, recorded in the college of Arms London, and issued to a Geoffrey Frank Pearce, the parchment scroll is 21 x 15 inches, and hung with two gilt metal seals each embossed with a crown, the scroll is painted with the coat of arms, and is hand written with the details and dated 1978, it is contained in a red covered wood box with gold EIIR ciphers" it went to a new home in the UK. 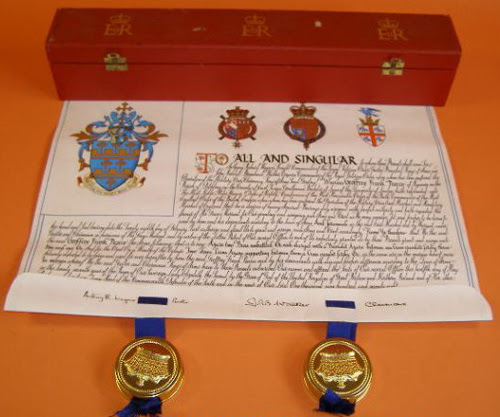 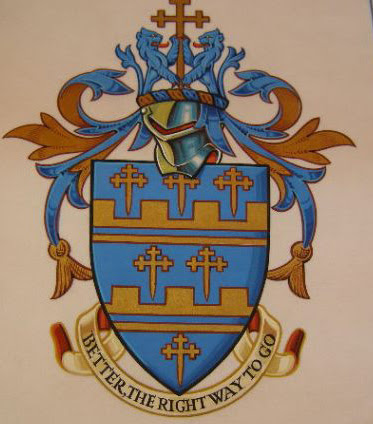 I will be presenting a talk (I hesitate give it such a grand handle as lecture!) on Saturday at the September meeting of the Cheshire Heraldry Society and would like to invite my reader to attend.  It is to be my very first talk on any heraldic subject and I have chosen to present an illustrated chat on the armorial bearings of Goostrey and allied families.

The original intention of the talk was to have been a study of the arms used by the descendants of  Lidulph de Twemlow illustrating their use of squirrels and chevrons. However, it soon became apparent that I could not ignore the wider descent of Lidulph’s own ancestors. The study therefore has become a meandering one and begins with Wulfric, Lord of Croxton and Lache.

If you are anywhere near Macclesfield on Saturday, it would be a pleasure to see you.

Meetings of the Cheshire Heraldry Society are held at the Townley Street Schoolroom, Townley Street, Macclesfield, starting at 2.30 p.m. The room opens at 2.00 p.m. and there is a pay and display car park 100 yards away. 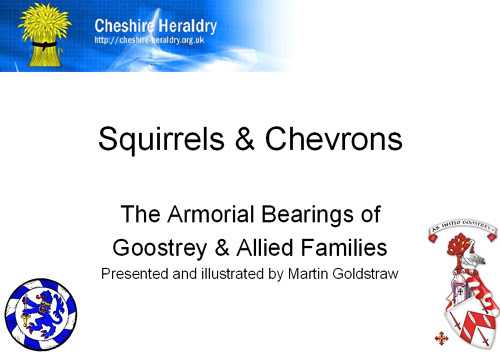 Garioch kept in the family.

I spent Friday evening and the best part of Saturday in Edinburgh enjoying the very good company of fellow members of The Heraldry Society of Scotland and during conversation over dinner on the Friday evening learned that The Countess of Mar has appointed Hugh de Laurier as the new Garioch pursuivant. Mr. de Laurier is the nephew of the late David Gordon Allen d’Aldecamb Lumsden of Cushnie, SMOM, MA, FSA Scot. who died whilst still in office on the 29th August 2008.
at September 21, 2008 No comments:

I have just purchased a heraldic Printing Block on eBay for £23.00. It was described by the vendor as an original antique printing block with the Holcroft Coat of Arms in original condition, likely to have been made during the late Victorian period. There was no indication as to the exact date of manufacture or the artist who made it. 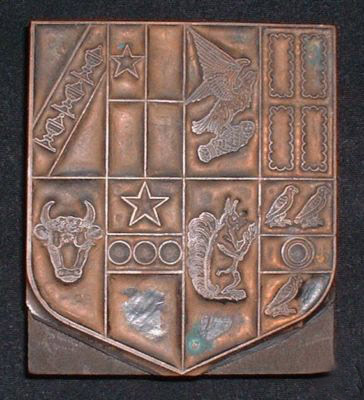 The plate is mounted on a wooden block and the face material is copper.

I would blazon the arms as quarterly of eight:
1 Argent, a cross and bordure both engrailed Sable [Holcroft]
2 Argent, an eagle Sable, preying on an infant [proper], swaddled [Gules, banded Or] [Culcheth]
3 Quarterly Argent and Gules, in first quarter a mullet Sable [Mascy]
4 Argent, on a bend Sable three covered cups Or [Argent] [Rixton]
5 Gules, a fess between three falcons Argent, an annulet for difference [Penington]
6 Argent, a squirrel sejant Gules [Horton]
7 Argent, on a fess Gules three bezants, a mullet for difference [Jennings]
8 Gules, a bull's head cabossed Argent, armed Or [Duston]

These arms use the same quarters as those recorded in the Visitations of Chester 1533 – 1580 as those of Holcroft of Vale Royal but the marshalling is not identical and there are what may be cadency marks added to the quarters representing Pennington and Jennings; I have taken these markings to be cadency marks  because, as yet, I have no contrary information.

I have emblazoned it in colour to illustrate the actual arms. 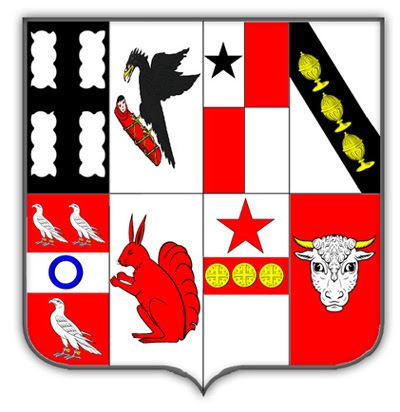 I often get requests from the uninitiated to translate blazons and more often than not, where it is a genuine plea for assistance, I am only too pleased to advise as long as it doesn't divert me too much away from earning a living. I do tend to get rather choosy when I am asked to provide illustrations; simply because they take time to prepare.

This month I have received two very different requests, one definitely heraldic, the other not strictly so but perhaps subconsciously prompted by the science. Of definite heraldic origin was the straightforward request by a gentleman who, for his own study and amusement, has produced a web site setting down the history of Cheswardine Manor in Shropshire and wished to actually see in full colour the armorial bearings awarded to Charles Donaldson-Hudson in 1862: I produced this illustration: 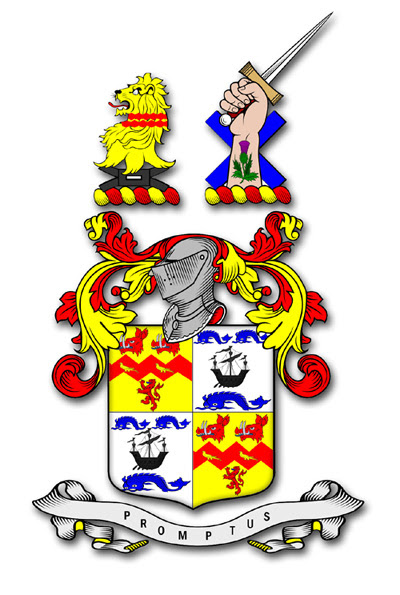 My second request of the month came from a Cheshire motorcycle racer who wanted something that represented his county to display as a logo as an antidote to the many hundreds of fellow racers from Yorkshire and Lancashire who so proudly show their respective (heraldic) roses. 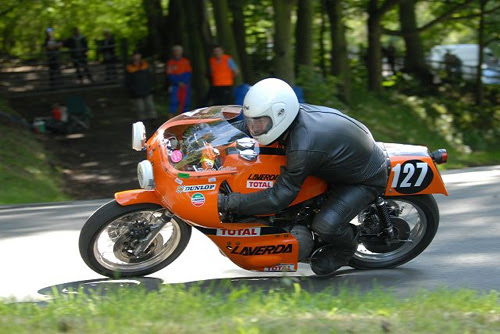 Rob Dixon, who made the request, in action.

Rob wanted to use the wheatsheaf (garb to us armorists) as the basis for the proposed logo but after some discussion where I mentioned that Hugh Lupus, the first earl of Chester, had used a wolf's head on his coat of arms and I felt that such a charge might appeal to the motorcycle fraternity, we came up with this: 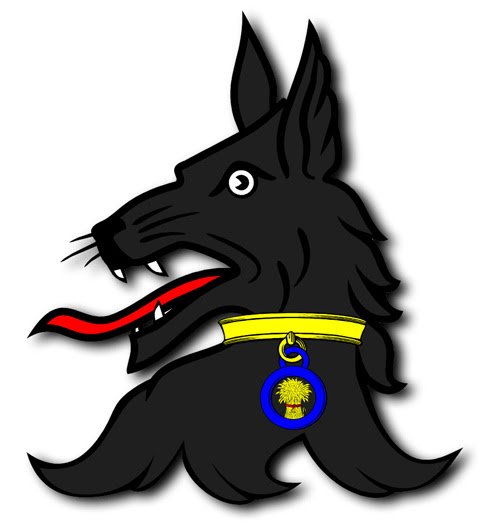 Rob has promised to send me a photo of the logo being used in anger.
at September 04, 2008 No comments:

Last chance to be a subscriber - Crawford Armorial

Alex Maxwell Findlater's latest book is about to go to press.  If you are interested, you can be a subscriber, meaning you get a better price and you get your name in the book.    You can order online or print the flyer and send it by post with a cheque.

Alex informs me that if it were published commercially the price would be about 4 or 5 times what the Heraldry Society of Scotland is charging. 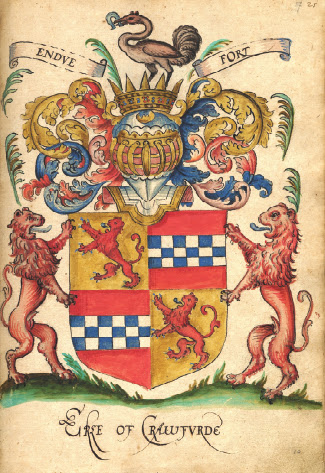 This is a splendid example of a Scottish Armorial and dates from 1601. It is one of the most beautiful pieces of heraldic art painted in Scotland during the period when these armorials were produced, the 16th and 17th centuries. It used to be called the Armorial of Sir David Lyndsay of the Mount Secundus; it is in the Bibliotheca Lindesiana, the library of the earls of Crawford. It is an armorial of the King, James VI, his Queen, Anna of Denmark, his son, Prince Henry, and the peers and lairds of Scotland. Compared with earlier work it is finer, more elegant, more carefully painted; compared with later work it displays a wonderful fluidity of line, particularly in the supporters and charges from nature, in the lions of course, but also in the other beasts and birds.

It is to be published by the Heraldry Society of Scotland, with financial support from the St Andrews Fund for Scots Heraldry. The editor is Alex Maxwell Findlater, whose Aspilogia Scoticana was published by the Society in 2006. The facsimile will be reduced slightly in size and will omit the blank pages. Thus the volume will be the same height as other armorials published by the Society. The armorial itself is of some 140 folios. These will be accompanied by a full introduction, annotation of the arms and a biographical index of the persons included. The index will put these persons in context, noting their parents, wives and heirs as well as family relationships, so will be almost a Burke’s or Debrett’s of Scotland in the middle of James VI’s reign.

It is expected to be ready for distribution in November 2008 and so is offered at a special subscription price initially. The Subscription Period will end on Monday 8th September 2008. The names of subscribers will be included in the book.
at September 02, 2008 No comments:

Office of the Chief Herald of Malta - Ombudsman's Conclusions Published