I received the bookplate of George Richard Lane Fox, 1st Baron Bingley, a while ago as a gift from Steve Slater (for which grateful thanks have been extended) and have only just got round to adding it to my albums so I thought it appropriate to post it here as well. 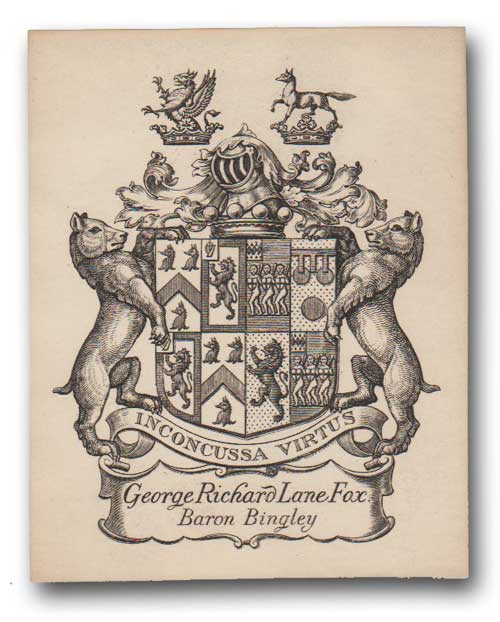 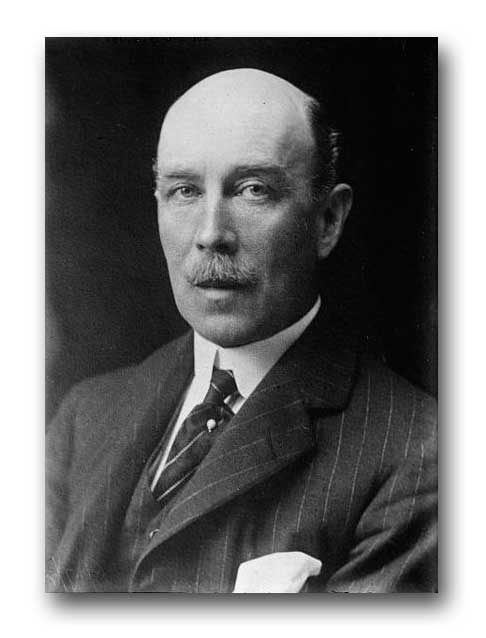 On 24 July 1933 he was elevated to the peerage as Baron Bingley, of Bramham in the County of York.

To all my Lancastrian friends on this their day: I shall raise a glass in the time honored toast to '''The Queen, the Duke of Lancaster''. 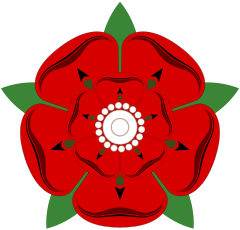 A Collection of Armorials of the County of Orkney.

Yet another facsimile book available from The Armorial Register.

First published in 1902 by H.L. Norton Smith Armorial bearings from tombstones, wood carvings, seals etc., with extracts from the Lyon Registers, and genealogical notes compiled from public records and other sources.

The Chief object of this book is to preserve a record of the Armorial Bearings of many ancient Orkney families, some of which, though probably quite authentic, are not in any of the registers of the Lyon Office, but are only to be found upon decaying tombstones and fragile seals, and are consequently in great danger of being lost sight of beyond all hope of recovery.

A Clean original facsimile of the original, not an OCR copy.

The book is in paperback with 144 pages and 48 illustrations of Arms and numerous blazons reproduced by facsimile from the original book and is a perfect-bound bookstore-quality, standard paperback binding A5, 6in wide x 8in tall (14.81cm wide x 20.99cm tall).

http://www.armorial-register.com/orkney-heraldry.html
at November 20, 2015 No comments:

The Arms of The Baronial and Police Burghs of Scotland

New from The Armorial Register is a book I greatly enjoyed helping my colleague, John Duncan of Sketraw, put together  - The Arms of The Baronial and Police Burghs of Scotland. First published in 1903 by John, Marquis of Bute, KT. J.H,Stevenson and H.W. Lonsdale and is part of The Armorial Register's Classic Heraldry and History Series. 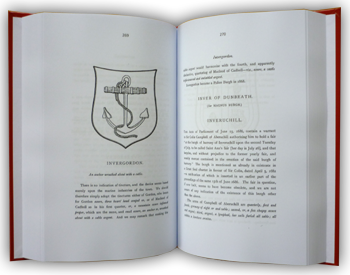 A great book for the student of heraldry and those interested in early baronial and municipal arms.The book is in casewrap-hardback with 534 pages and 164 illustrations reproduced by facsimile from the original book and is 6in wide x 9in tall (13.29cm wide x 22.23cm tall). ISBN: 978-1-326-47921-3.

In April 1903 'The Spectator' gave this review of the original publication: "It contains somewhere about three hundred coats-of-arms, or an intimation that no coat-of- arms exists, or, not infrequently, the suggestion of heraldic bearings that would suit the circumstances. The volume does not promise much interest to the reader; but it has more than one would think. There is no little genealogical and historical information in it ; there is much that the student of heraldry will prize. The authors, too, now and then indulge in a gentle jest at the errors, heraldic or other, with which they have been brought in contact in the course of their inquiries."

A Clean original facsimile of the original, not an OCR copy.

The book, part of The Armorial Register's Classic History and Heraldry Series, is in hardback with 534 pages and 164 black and white illustrations reproduced by facsimile from the original book and is 6in wide x 9in tall (13.29cm wide x 22.23cm tall).

[The companion edition to the above book "The Arms of The Royal and Parliamentary Burghs of Scotland" 1897 is at present being prepared and will be released soon.]

A sneak preview of an armorial facsimile.

Shh. Just for you,here is a sneak preview of the latest project I am involved with via The Armorial Register Limited.

The Lyndsay of The Mount Armorial 1542.

This book is a new and updated facsimile of the original 1822 and subsequent 1878 facsimiles of an ancient heraldic manuscript owned by Sir David Lyndsay of the Mount, Lyon King of Arms, first published in 1822 by W & D Laing and edited originally by Sir David, Laing, LLD.

The original manuscript was emblazoned and completed by Sir David Lindsay in 1542, the year he was appointed Lyon King of Arms however, prior to that date he had already been acting in the capacity of Lyon albeit unofficially. The roll also contains other shields that appear to have been added at a later date sometime in the 16th century.


This new book contains 172 pages with 145 A4 plates with 490 individual achievements the Roll covers all of Scotland including some Highland entries, as well as a some attributed arms and the arms of European Royalty. This important document is the earliest known extant official Register of Arms in Scotland.


The Armorial Register Limited has retained the original alphabetical index by page along with the essential translates text written by Lindsay in his originals although we have corrected a few errors found in the original index.


The book is available from The Armorial Register Limited at a price of £49:00 plus post & packaging.
at November 06, 2015 No comments: 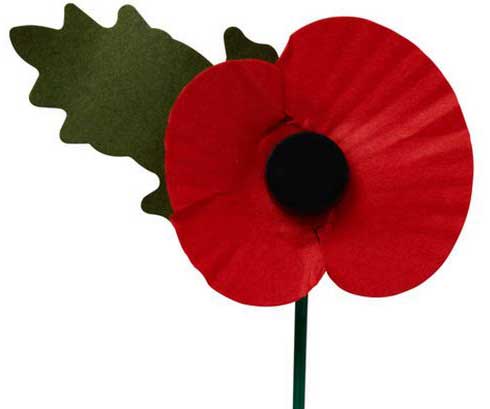