It is always a pleasure to receive the latest edition of The Heraldry Society's Heraldry Gazette and this month, although the edition was late, is no exception.

I do hope that readers won’t consider my desire to pick up on one particular point in Dr. Gray’s follow up on the Lord Warrington item to be too pedantic. The article gives us the quarterings of this by now familiar panel as they are recorded in the Hatchments and Armorial Panels disk in the Heraldry Archive series and I feel that those less familiar with Cheshire heraldry may fall into the trap of believing that quartering number 9 represents a family surnamed Forester; this is not the case. The arms Argent, a buglehorn stringed Sable, are more usually referred to as Kingsley’s Forester’s coat and always accompany the arms of Kingsley. They are rather rare being arms of office.

Harleian MSS 1424 and 1505, as recorded in the Visitations of Cheshire of 1580, inform us that Ranulph, Earl of Chester, granted the office of Bailiwick and the keeping of the forest of Delamere to Rafe Kingsley of Kingesley his heirs and assigns forever with diverse other liberties and those same Visitation records show the arms of Done of Utkington with the arms Argent, a buglehorn stringed Sable borne as an escutcheon of pretence. The accompanying note states that  “The Inescocheon is the Armes of ye fforestership & is the seal of office”. The same Visitations record the arms of Booth of Dunham (a quartering of 15) and again the arms are referred to as Kingsley’s Forester’s coat. 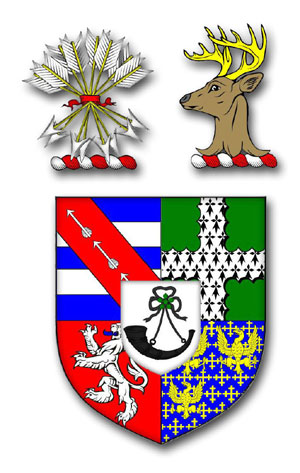 The Horn, thought to have been used as the insignia of office of the Foresters of Delamere is known as the “Delamere Horn” and still exists as an important piece of regalia possibly originating from the 12th century but known to have later additions. The Chief Foresters of Delamere covered an area encompassing most of central Cheshire. The horn was handed down through the Done family and its descendants as hereditary Chief Foresters and it is now part of a collection in the Grosvenor Museum in the city of Chester.

Images of all these coats can be found on the Cheshire Heraldry website.
at December 08, 2012 No comments: