Lawton of Lawton (Not)

My reader will know that I wear a number of hats, one of which is Director and Editor to The Armorial Register and it is no secret that we refuse far more applicants than we accept. I don't usually make public details of refusals and they are usually kept private, for our own amusement, in a Rogues Gallery, however, today we received an application from a professional gentleman from the State of Texas, USA, which has a particular relevance to Cheshire heraldry.

The application was in the name of Lawton. I shall spare the applicant further embarrassment and withhold exact details of his name but alarm bells rang immediately because he used the title Sir, post-nominals CM.Hkt.B (whatever they are)  and stated that he was Baron of XXXXXXXX, London.

He stated that his arms had been "granted by Robert Cook, Clarencieux by l'res patentes. Dated 14 R. Elizabeth (1572)" and had been "registered in Burke's General Armory, 1884".  These details, along with the blazon, are correct in as much as they refer to the arms of Lawton of Lawton as recorded in Visitations of Cheshire however, the image submitted with the application was pure Bucket Shop. 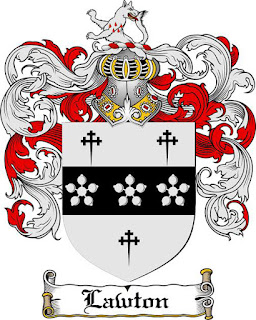 Bucket shop arms of Lawton: Name in motto scroll is a definite no no, these are the arms an English gentleman who would never us that helmet, and the poor overall depiction and scale of the crest are all indications of the fact that these are bucket shop arms.

The Lawton Family is well known and well documented. Their armorial bearings are lavisly illustrated in a number of places in Cheshire and especially so on their own estates and they have beautiful hatchments in Church Lawton; it is highly unlikely that a scion of this family, who would be well aware of his heraldic heritage, would have to pay $9.95 to find out what his "family crest" was. 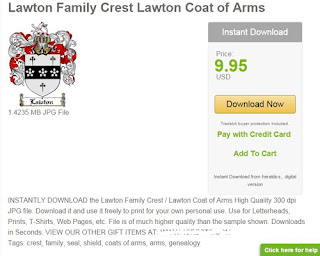 Where a citizen of the United States of America is claiming armorial bearings by descent from an armigerous ancestor who emigrated to the USA from England where the arms were granted to said ancestor, we expect to see a recent exemplification of the arms (from The College of Arms) or genealogical proof of descent from an armiger.

Sadly, this appears to be yet another example of ignorance of the fact that (in England) there is no such thing as a "surname" Coat of Arms.
at February 07, 2016 No comments: