The end is nigh.

When I last visited Macclesfield to attend a Cheshire Heraldry Society lecture I took a photograph of the entrance to Macclesfield Bus Station, for no other reason than it features, as do many of the bus stops in the area, the pseudo-armorial logo adopted by Cheshire County Council. 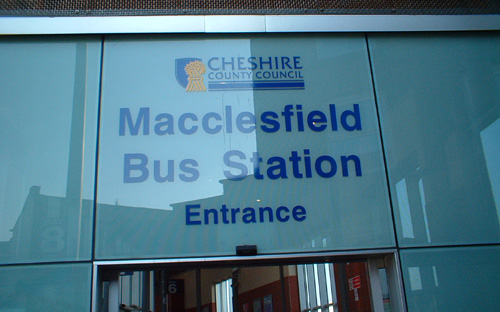 Now I don't actually dislike this logo, indeed to an armorist its origins are quite plaint to see, but it doesn't sit well with me simply because it pretends to be heraldic but isn't. The County Council has a perfectly likable coat of arms which is described on their own website as "one of the most beautiful in England" so why, I wonder, did they consider it necessary to turn it into a logo? Worse still, their arms are not "Azure, a garb Or" as the logo would pretend to nod towards, and which is in fact the coat of arms of Grosvenor, but are in fact "Azure, a sword erect between three garbs Or".

Why have I embarked on this rant?

Well, the logo reminded me that for Cheshire County Council the end is indeed nigh. The Government in its wisdom has announced that the six district councils and the county council in Cheshire will be abolished and replaced by unitary local government.
There were two proposals for unitary government in Cheshire:

There will be a lot of upheaval in the transition, all no doubt with the aim of saving money. A small, and possibly insignificant plea from this armorist is that the two new unitary authorities have the inclination to petition for armorial bearings anew. I am not hopeful.

Indeed I fear that even if the inclination is there, unless some imaginative herald finds a way to transfer the arms of Cheshire County Council by way of Royal licence to one of the new authorities, those arms so rightly described as "one of the most beautiful in England" may well find themselves consigned to the dustbin of history. That will be a pity.
at March 09, 2008