Clive or Clyff of Hurley [Huxley]

It is impossible to proof read your own work!

I've been preparing a talk for The Cheshire Heraldry Society and in doing so I have created afresh the images I will need. Looking back on the early images I have done for the Cheshire Heraldry web site, even I can see how much I have improved! Why, I wonder, did I decide to use grey for Argent/silver? I also spotted one horrendous mistake in the emblazonment of Clive or Clyff of Hurley [Huxley]. I don't know why but in the second quarter I emblazoned a fess cotised Gules when I should have emblazoned a bend cotised Gules.

Clive or Clyff of HurleyArms: Quarterly of six coats -
1 and 6 Argent on a fesse between three wolves' heads erased Sable as many mullets Or.
2. Ermine on a bend cotised Gules three crescents Or. [Huxley]
3. [Sable] three garbs [Or]. [Styche]
4. Gules, a lion rampant Or between three crosses formee fitchee Argent.
5. Quarterly Argent and Sable four cocks counterchanged. 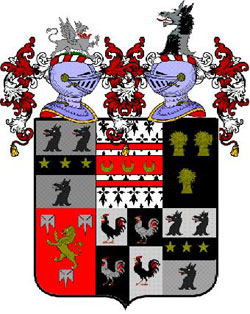 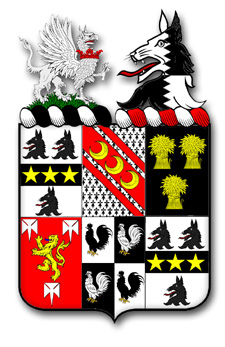