I take this opportunity to congratulate the new Lord Lyon whose appointment has been announced today. Readers of this blog may remember that way back in June last year, when speculation was rife that Lyon Blair was to retire, my feeling was that W. David H. Sellar, Bute Pursuivant of Arms, would be appointed.

The official announcement confirms that I was right:

The Queen has been pleased, on the recommendation of the First Minister, to appoint Mr William David Hamilton Sellar, Solicitor, to be Lord Lyon King of Arms.

Mr Sellar succeeds Robin Blair, LVO, WS who has held the office of Lord Lyon since 2001.

Her Majesty is also to appoint Mr Sellar to be Secretary of the Most Ancient and Most Noble Order of the Thistle.

Mr Sellar qualified as a solicitor in 1966. After two years with the Scottish Land Court, he joined the Faculty of Law at the University of Edinburgh where he is now an Honorary Fellow.

The Lord Lyon has both administrative and judicial functions. The administrative functions include the granting of armorial bearings to individual persons and corporations. The Lord Lyon's judicial functions include ruling on who has the right to bear an existing coat of arms, and the authorisation of matriculations of differenced Arms. The post is part time - three days a week, with a salary range of £56,000 - £78,500 pro rata.

The Lord Lyon is appointed by Her Majesty The Queen under section 3 of the Lyon King of Arms (Scotland) Act 1867. The Office of the Lord Lyon is situated in New Register House, Edinburgh.

David Sellar, aged 67, is a graduate of the Universities of Oxford (History) and Edinburgh (Law). He qualified as a solicitor in 1966. After two years as a legal assessor with the Scottish Land Court, he taught in the Faculty of Law at the University of Edinburgh. He is now an honorary fellow of the Faculty. He is joint author of the Saltire Society's Scottish Legal Tradition (1991), and has written on the history of various branches of Scots law, including marriage, divorce, incest, homicide and unjust enrichment. He has published on the Lordship of the Isles and on the origins of many Highland families, including the Campbells, MacDonalds, MacDougalls, MacLeods, Lamonts, MacNeills and Nicolsons.

He was O'Donnell Lecturer (in Celtic Studies) at Edinburgh in 1985, Stair Society Lecturer in 1997 and a Rhind Lecturer in 2000. He has been a Member of the Ancient Monuments Board for Scotland, Vice-President of the Society of Antiquaries of Scotland, Literary Director of the Stair Society, Chairman of Council of the Scottish History Society and Chairman of the Conference of Scottish Medievalists. He has also served on the Council of the Scottish Genealogy Society and of the Heraldry Society of Scotland. He was appointed Bute Pursuivant of Arms in 2001.

The appointment followed public advertisement of the post and a selection board met to interview a short-list of candidates and provide a recommendation to the First Minister. 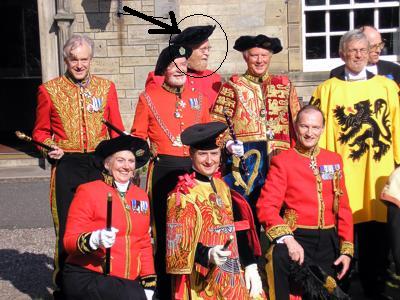