Staying within our fourth section of our classification where we place arms in which charges representing part of the bearers' names are combined with ordinaries we can place the chevron and Katherine-wheels of Wheelock. There is also a pun in the Leversage arms but as that fits into the fifth group, in which the names of the bearers suggest some quality of the charges, and therefore the allusiveness of the arms is naturally less immediately obvious, though the pun becomes apparent with a little thought, I shall deal with that one later. 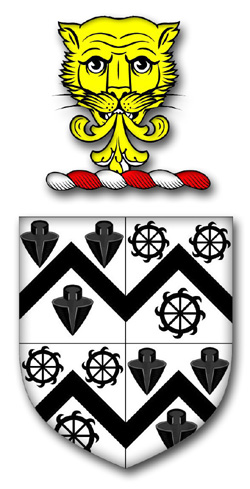 * The upper part of the fleur-de-lis, usually shewn above the leopard's face, is omitted in the MS.