Coming now to the fifth group, in which the names of the bearers suggest some quality of the charges, the allusiveness of the arms is naturally less immediately obvious, though the pun becomes apparent with a little thought. Thus the charges which Swettenham placed on a green bend are spades wherewith a man tills the field in the sweat of his brow. 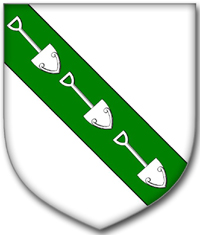 Swetnam (Swettenham)Argent, on a bend Vert three spades of the first.