Lingering for a while within the third group, wherein part of the bearer's name is shown by the charges, I am rather fond of the fretted trout of Troutbeck. 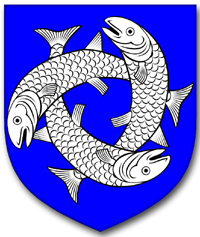 Troutbeck
Arms: Azure, three trouts fretted in triangle Argent
Regular readers of my weblog may recall that I have written previously on the arms of Troutbeck, the first to report on an apparent lack of any fail-safe checking mechanism between the Court of the Lord Lyon and The College of Arms when these ancient English arms were granted, by The Lord Lyon in Scotland, to the Catholic Diocese of Aberdeen (granted 1990) and the second to report that The National Archives had an exhibition titled "Representing Blackness" when one image which caught my eye was that of a pedigree of Sir Robert Troutbeck.