I have commented on the apparent lack of any fail-safe checking mechanism between the Court of the Lord Lyon and The College of Arms before (arms of Massey of Dunham) and today I stumbled upon yet another example where the ancient arms of a Cheshire gentleman have been granted to someone (or in this case an institution) quite unconnected with the ancient arms. I do appreciate of course that heraldically the Scottish jurisdiction is quite separate to the English jurisdiction but, as I said last time, I do remember the English heralds being careful, when my own arms were being devised, to ensure that I was not about to tread on the toes of anyone in Scotland; today's find has reinforced my opinion that the courtesy checking is not reciprocated!

I was browsing my 1997 copy of Double Tressure, the journal of The Heraldry Society of Scotland, and found a facsimile image of the grant of arms to the Catholic Diocese of Aberdeen (granted 1990). 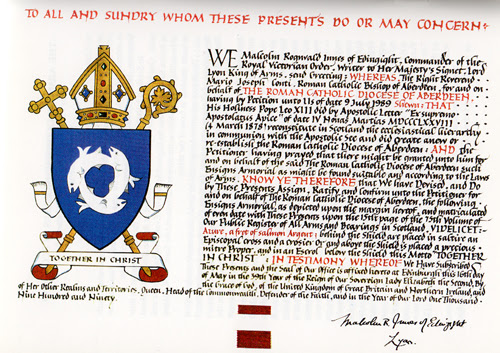 Compare the shield with the arms of Trowtbeck (Troutbeck). 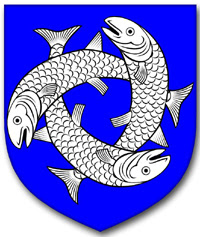 Heraldically it may be two separate jurisdictions but both (so far) remain firmly in the United Kingdom.
at September 04, 2011