Quite near to where I live is the rather attractive tourist town of Much Wenlock, which, because of its history, is entwined closely with The Olympics; some of my web log readers may be aware that next year the Olympic Games are to be held in London and The London Organising Committee of the Olympic and Paralympic Games ( LOCOG) has designed a toy mascot and called it "Wenlock".

It has today come to my attention that Much Wenlock Town Council, successors to the ancient Borough of Wenlock, in Shropshire has copyrighted it's seal and intends to licence its use to local organisations who wish to use it. 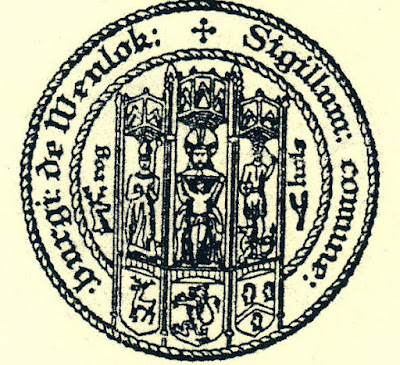 The Town Clerk has also stated that "Use of the Seal is free to not for profit organisations. When the draft charging policy went to Council for approval councillors could not agree on the charges. Some said it should be more and some said we shouldn't let anyone use the seal."

I am firmly in the shouldn't let anyone use the seal camp. I find it quite bizarre that a corporate body should be allowing anyone to use its seal. A seal (which can feature a coat of arms but is not to be confused with a coat of arms) is the legal signature of the corporation and is used as means of authentication. It is a mark or symbol which is attached to a legal document. If I were a resident of Much Wenlock, I would be protesting in the strongest of terms that it is not at all proper for the Town Council to license the use of its seal to anyone. This is an ancient seal - I think that the original users of it would know full well what the purpose of a seal is.

I have suggested most strongly to the Much Wenlock Town Clerk that it is not proper to take this course of action.
at October 26, 2011