Carrying on with my tribute to Local Authorities, yesterday I spoke of the County and the Unitary Authority responsible for the area in which I live and you may recall that we didn't get off to a very good start because Telford & Wrekin Council isn't armigerous. Within each Unitary authority, or County depending upon where you live, there are, more often than not, Civil Parishes administered by Parish or Town Councils and some of them are armigerous. Unfortunately, once again where I live there is a distinct absence of heraldry!

I live in the Civil Parish of St. Georges and Priorslee which, although not armigerous, does have a very nice pseudo armorial badge.

St Georges & Priorslee Parish Council was elected in 1988 when Telford and Wrekin Council created eleven new parishes as part of the formation of Telford New Town in Shropshire.

Before the formation of the District of The Wrekin (Telford) and later the Borough of Telford and The Wrekin, the Urban District of Oakengates comprised Oakengates, Wrockwardine Wood, St. George's, Priorslee, Snedshill, The Nabb, Wombridge and Trench, and always had a Labour council.

The creation of Oakengates Urban District in 1898 helped to improve municipal government, the U.D. comprising the civil parishes of Wombridge, Priorslee, St. George's, and Wrockwardine Wood. Nevertheless Oakengates remained under four education authorities until 1903 and three poor-law unions until 1930. The urban district council first met at the Coffee Palace but soon moved to rented offices in Market Street. Its offices were in Oxford Street c. 1905-c. 1940, thereafter in Stafford Road. Arms were granted to the council in 1960 and included a crest (out of a coronet composed of four laurel leaves set upon a rim or a demi wolf argent collared and lined gold and holding in the forepaws a tower sable the battlements enflamed proper) and the motto Haec sunt nostra robora.

The name, Oakengates, has nothing to do with Oak or Gates but is derived from the Ancient Brythonic name for the valley which was Usc-con meaning The Lake (Usc(water) and the confluence (Cond) of two streams and from the Old Norse gata, path see gh- in Indo-European roots.  A history of Oakengates was written by local historian Rev J.E.G Cartlidge, whose name is commemorated in the name of the retirement home Cartlidge House.

Arms : Or, an eagle displayed, wings inverted, azure grasping in the talons two abbots' crosiers sable; on a chief gules three acorns slipped and leaved gold.
Crest: Out of a coronet composed of four laurel leaves set upon a rim Or, a demi wolf argent collared and lined gold and holding in the forepaws a tower sable, the battlements enflamed proper.
Motto: Haec sunt nostra robora.

The arms were officially granted on September 15, 1960.

When Oakengates Urban District Council became obsolete,  Oakengates Town Council "adopted" their arms and now use them on their website - spot the difference; is it an error or is it deliberate? 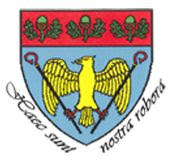