I never thought I'd mention Football on this weblog!

I never thought I'd mention football on this weblog but I suppose it had to happen. Scanning through the photographs of Inn signs, given to me by the late Alan Fennely, I came across one for The Lion of Vienna, a Samuel Smith pub, in Bolton, still open as I write this entry.

The football connection is obvious as the pub sign is entirely devoted to commemorating one particular football match, the 1952 friendly between England and Austria, and one player especially. It is described as "An impressive detached pub in a part of town historically short on licensed premises. The pub is named in honour of Bolton Wanderers legendary striker Nat Lofthouse who earned the nickname Lion of Vienna for his die-hard performance for England in a game in Austria in 1952". I am rather fond of the "crest" of the English Lion kicking a football, a pun if ever there was one, for the man who became known as "The Lion of Vienna". 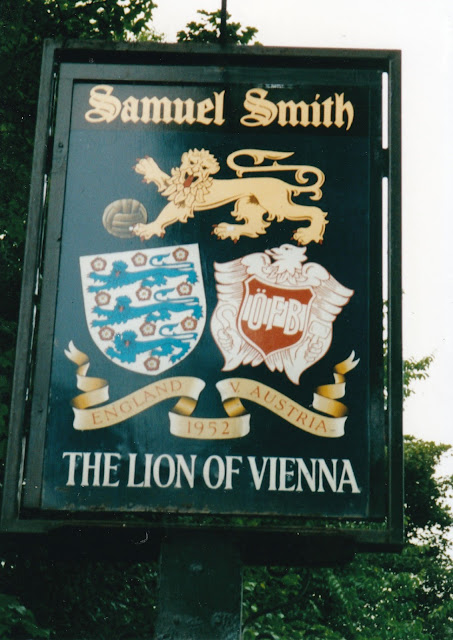 The sign displays the shield of England's National Football Team along with the 1950s emblem used by Österreichischer Fußball-Bund, the Austrian Football Association, and the motto scroll proclaims "England v. Austria 1952.  If you are an ardent football fan and have a thirst for match information, there is a web page dedicated to the statistics and facts of the match here: England V Austria 1952.