Recently offered for sale on eBay with a buy it now price of  £1,850; 1887 William John McNeight Palmerston Park ULSTER GRANT OF ARMS Boxed. 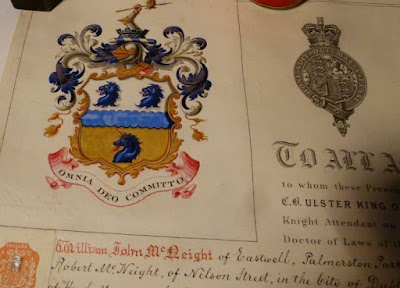 Described by the buyer as being a "Antique Queen Victoria 1887 Grant of Arms in its original official black leather box of issue. The box first... this is wood with black leather and the gilt Crowns & VR Cipher - Cypher to the lid and front.. with gilt embossing tooling as well.

Two good brass hook and snecks.
It has rubs and scuffs on the corners and the base has been a little damp in the past with the stain and curling of the base material. The box is 21 inch long x 3 and half inch wide x 3 and half inch tall.
Undo the snecks....see a really nice brown mottled paper inside with an inset HOLE for the circular seal in the base, which has a red paper in here. Two good brass hinges on the lid.
The Grant of Arms is rolled up and the black wax seal is attached by a pale blue silk ribbon which hangs down off the main document 9 inch.
The black wax seal is 2 and quarter inch dia x 1/4 inch deep.
The document is all hand written and its to GRANT the ARMS to William John McNeight of Eastwell, Palmerston Park, Dublin.
He was a merchant according to this document written in 1887 and son of Robert McNeight of Nelson Street in the city of Dublin, Gentleman, deceased by Mary his wife sister of Hugh Moore of the city of Dublin.
The chap granting the arms is Sir John Bernard Burke Ulster King of Arms and it is signed by him down at the bottom left side.
Her Majesty's Royal Letters Patent under the Great Seal of Ireland.
It then has 4 lines of the actual Heraldic terms of his Arms granted and the Crest too.
The arms are very nice and illuminated.
The official orange embossed seal at the left hand side has the fine sheet of silver in it as well.. it cost TEN POUNDS with the Inland Revenue Dublin date 1887.... there is the small printed paper seal stuck on the back too as usual.
The Ulster Grant of Arms is 20 inch x 19 inch ... remember the seal hangs off a further 9 inch on the pale silk blue ribbon.
These look well framed up especially if you are RELATED to the named person.
I like to collect this sort of item myself too as they are unique.. they do not make duplicates of these.
William John McNeight was Chairman and Managing Director of Hugh Moore & Alexander Ltd - Wholesale Druggists and he died June 6th aged 76 which is mentioned in the 1910 issue of The Chemist & Druggist magazine.
He left a large estate £21,554 and afew shillings and pence too.
Notice this name Hugh Moore ...remember on this document it says his mother Mary was Hugh Moore's sister... so thats how he got that position in that firm.
A very nice antique Grant of Arms." 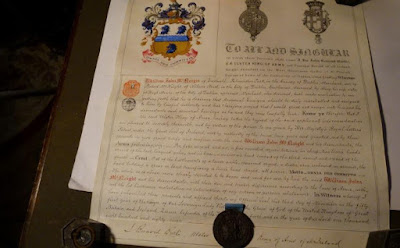