It doesn't wash (well not with me anyway)!

It  has come to my attention that a letter, from Dr, Jose Herrera, Malta's minister for National Heritage, Arts and Local Government is being sent to those who are making enquiries about the status of the so called Chief Herald of Arms of Malta. 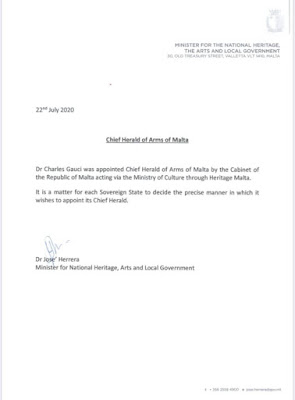 This letter is of course a complete nonsense. The very Act of Parliament which created Heritage Malta demands that the Ministry of Culture presents a written paper to Parliament, so that Parliament can decide when changes such as this are made. Of course it is a matter for a Sovereign State to decide how it appoints a Chief Herald but how does a Sovereign State decide such matters - by a decision of or an Act of Parliament. It is preposterous for any Minister, let alone a Minister of Culture, to pretend to have assumed the powers of State without any authority of Parliament. Section 10 of the Act of Parliament which created Heritage Malta does not allow the Minister of Culture any such delegated powers. That is the crux of the matter.

The full details of my forensic examination of the FAQs is available here: Examination into the claims of the "Chief Herald of Malta".

I await the findings of the Chief Investigator.

Email ThisBlogThis!Share to TwitterShare to FacebookShare to Pinterest
Labels: Fakes and Fables, Hall of Shame, Heraldry, Odds and bobs