You would think that if anyone is going understand the principles behind a science it would be a university but, regrettably when it comes to business (and nowadays, it does seem that universities are forced to become streamlined businesses) even these institutions leave their academic brains at home and hand the marketing of their brand to bright young things who, of course, know best. I beg to differ.

When The University of Chester and Shropshire Council got together to establish The University Centre Shrewsbury "to increase Higher Education prospects and offer a vibrant and rounded student experience" they also created an unfortunate armorial hybrid which is really a logo attempting to pass itself off as a "crest" [sic].  Someone came up with the bright idea of "combining" a portion of the arms of  The University of Chester with the armorial bearings of the Town Council of Shrewsbury (despite the fact that this is a Shropshire Council initiative, they still took the arms of the town and not the Shropshire arms). 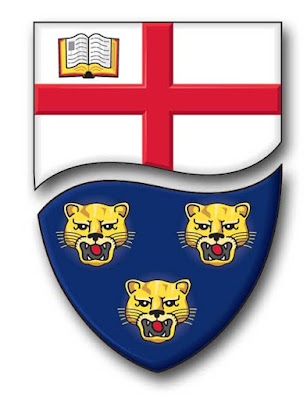 As a logo I don't suppose it's too bad however, I have absolutely no doubt that whoever created it wanted it to be heraldic or at least heraldic in nature and many will indeed believe that it is a "coat of arms" so if you want a coat of arms, why not actually have a coat of arms? In terms of the science of heraldry something resembling a shield which is dissected in the middle by a wavy line with the top half floating above the bottom half  isn't and can't be an heraldic shield. If it were actually one piece (joined together) it would be considered to be truly heraldic but the fact is that it isn't!

If someone recreated something in any other field of science there would be some professor or other looking over their shoulder pointing out the fact that they completely ballsed up the formula. I have a completely novel idea; if someone wants to create something heraldic, why not consult someone who knows something about it?
at July 25, 2015

Email ThisBlogThis!Share to TwitterShare to FacebookShare to Pinterest
Labels: Fakes and Fables