Facebook's ability to decide what one likes and doesn't like never ceases to amuse me. I noticed today (never really bothered to look before) that there is a section called "Suggested Groups" and apparently FB considers that I may wish to join a group called Friends of The Rothschilds & Rockefellers. It would seem that this particular group, of which I have no interest whatsoever, has some 3'387 Members! Why I would want to join a group of "Friends" of these particular people I have absolutely no idea. Sycophants Anonymous might be a more more appropriate title. 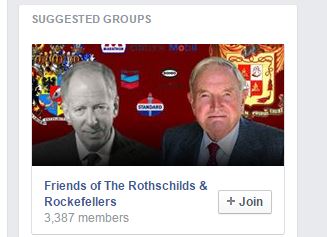