Earlier this month I made reference to the widow Legh of Adlington and her desire to forego the expensive luxury of an armorial funeral and it brought to mind the fact that students of Cheshire heraldry often encounter curiosities which are probably not unique to the county but which nevertheless illustrate that the science of armory was not invented in a complete and finished form  but evolved and continues to evolve to this day. Let us take but one example of the various armorial bearings of a number of Cheshire Leigh/Legh/Lee families; that of Legh of Adlington.

Illustrated below are the arms recorded in the 1580 Visitations and those later recorded in 1663. 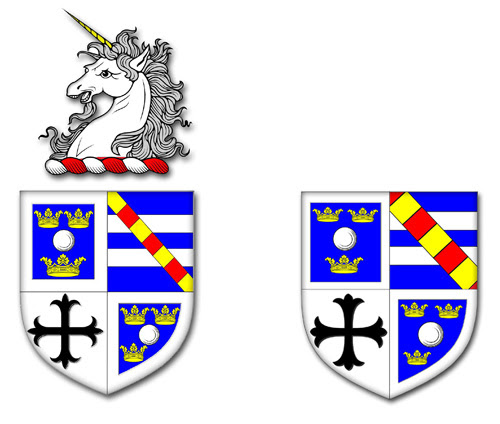 Setting aside, for the moment, the fact that the pronominal arms (1st & 4th quarters) are not those of Legh, we must surely notice that the second quarter, which is the coat of Legh, has changed, ever so slightly, over the intervening eight decades.

The armorial bearings of this family are those of Venables (Azure, two bars Argent), differenced by the bend (or bendlet) gobony, to mark the fact that the male line is actually descended from the Venables barons of Kinderton. John de Venables assumed the name of Legh after inheriting the Adlington estates from his mother's family.

Here again, the arms feature a a bendlet gobony Or and Gules and yet the next entry, one for Robert Leigh of Adlington, records the arms as being Azure, two bars Argent Over all a bend gobone Or and Gules. The bendlet has become a bend but we must bear in mind that without recourse to the originals this, or any of the others, could be  due to a transcription error.

The Visitations of 1613 record the arms of Legh of Adlington as recorded by the same family in 1580 with a bendlet as illustrated on the left above. Move forward another half century and not only has the bendlet put on weight with age but the tinctures are reversed and are now recorded as Gules and Or (as illustrated above on the right).

In my view, no. These arms tell a story which, to their original owners was a proud indication of their origins. They are essentially the arms of Venables differenced.  I don't think that for the purposes of differencing the original arms there is sufficient difference between a bend and a bendlet to make any difference whichever is used and if that is the case, it really doesn't matter what order the tinctures come in either.
at June 21, 2009

A dream which turned into a nightmare. Since this article was published, the owner of the castle placed himself into bankruptcy and late las...