Changes to the Visitations images now up to Marbury of Marbury:

Marbury of MarburyArms: Quarterly-
1 & 6 Sable, a cross engrailed between four nails Argent
2 Or, on a fess engrailed Azure three garbs of the field [Marbury ancient or Vernon]
3 Argent, a lion rampant Gules, collared Or [Vernon]
4 Vert, a cross patonce Or [Boydell]
5 Argent, on a fess Sable three mullets of the first pierced of the second [Boydell?]

Crest: On a chapeau Gules, charged with three bezants, and turned up Argent, a sarecen's head in profile, couped proper, crined Sable, wreathed about the temples Or and Azure. 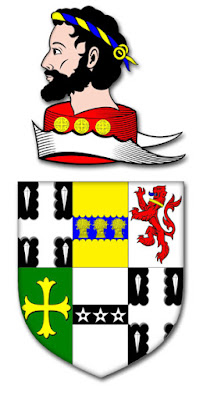