I'm being bombarded with emails and messages about the Chief Herald of Malta this morning.

It seems that he's sent out a Round Robin email setting out his newly minted authority and linking to the, now lawful, new, Gazette announcement of the date new legislation took place along with the link to the actual legislation. The email gives confirmation that he has now, officially and legally, been appointed, by Heritage Malta (phew, I bet he's relieved).

HOWEVER, the good news is that, under his real now existing powers, he has recognised the pre existing grants etc and brought them into his now lawful records. Hopefully, now he will alter his preamble on documents issued by him to reflect the proper date of his authority rather than rely on the meaningless 2019 Gazette notice.

So, a clean slate. 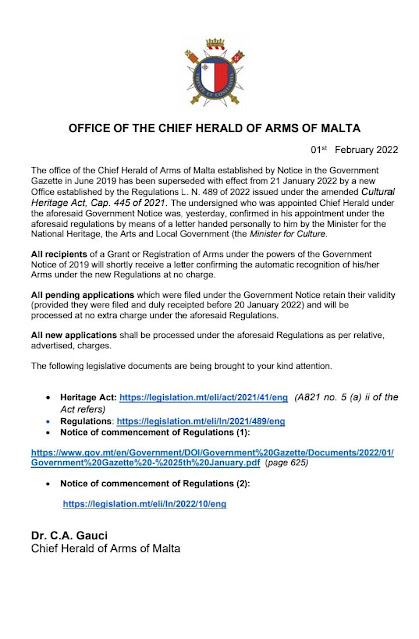