The arms of Gover

I have always enjoyed reading although, for some strange reason, I have always been drawn more to fact than to fiction. Being a heraldry addict when I get the time I am fond of looking through old copies of various publications such as my collection of back copies of The Coat of Arms, an heraldic quarterly magazine published by The Heraldry Society. It is interesting to view articles and correspondence from the early days with a "modern" eye; for example, a letter asking how, if Garter advises that crests should follow the orientation of the helmet, can we tell the difference between a lion rampant and a lion rampant affronty. Such a conundrum need not trouble us today since the convention that we must have left facing helms for gentlemen and esquires and front facing helms reserved for higher mortals such as knights no longer holds as we have, thankfully, moved on and we can move the helmet to suit the orientation of the crest without offending convention. 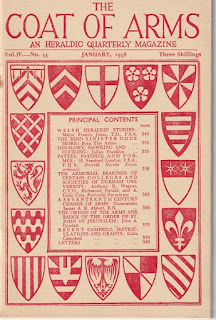 The correspondence columns are entertaining and there is much scholarly debate which although often  combative is almost always conducted in a gentlemanly fashion (sometimes thinly disguised). Today I was looking through  Volume IV No. 33, January 1958 (Three Shillings!) as I had been following a debate through a number of previous volumes on "The Misuse of Banners" . This one made me smile:

We are constantly hearing complaints in the Coat of Arms about alleged crimes connected with the misuse of the Royal Banner of Scotland, and indeed Scotsmen seem generally to be unduly sensitive to real and imagined slights in the field of heraldry.

May I mention just one instance of offence in the other direction? On many occasions I have seen banners of my arms borne and flown by Scotsmen IN ENGLAND. Would Lord Lyon assert the right of his countrymen to use these arms in this country as vehemently as he denies the use of his arms to an Englishman in Scotland unless duly matriculated?

P.S. In case anyone wonders what this letter is all about, may I remind them that the arms of Gover are "Azure, a saltire Argent". 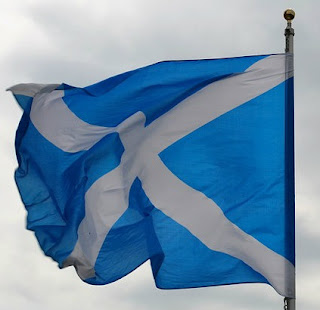 The personal banner of the arms of Gover!