Courtesy titles of the children of disclaimed Peers

Continuing my sojourn into back copies of The Coat of Arms, in a letter (Volume XII No. 86 April 1971) Patrick W. Montague-Smith, Editor, Debrett, reminds us that:

Under the Peerage Act a disclaiming peer irrevocably divests himself and his wife "of all right and interest to or in the peerage, and all titles, rights, offices and privileges and precedence attaching thereto." That the children are unaffected, retaining their precedence, was made clear in a statement issued by Garter King of Arms. The Earl Marshal, after taking the advice of Norfolk Herald Extraordinary and the Lord Lyon King of Arms, stated that they should continue to be accorded courtesy titles unless they do not wish to use them. The use of courtesy titles and styles, is, of course the Sovereign's prerogative.

Referring to Albertus Magnus' letter (Vol. No. 79, p 257) the Foreign Secretary undoubtedly ranks as a Secretary of State under Baronial Rank. His son, the former Lord Dunglass, obtained recognition at Lyon Court in his new name of D. A. C. Douglas-Home, Esq., before Garter's statement was issued, but in view of the above he retains precedence as the eldest son of an Earl. 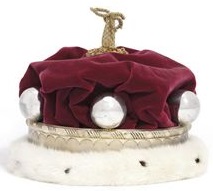 The coronet of a Baron in the peerage.
The comments in the letter refer to David Douglas-Home who, upon the death of his father, who had disclaimed his peerage, became 15th Earl of Home. 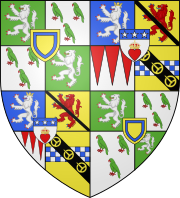 The arms of the Earl of Home: Image by Wikimandia
Quarterly: 1st & 4th grandquarters, quarterly: I & IV: vert a lion rampant argent armed and langued gules (Home); II & III: Argent three popinjays vert beaked and membered gules (Pepdie of Dunglas); overall an escutcheon or charged with an orle azure (Landale); 2nd & 3rd grandquarters, quarterly: I: Azure a lion rampant argent armed and langued gules crowned with an imperial crown or (Lordship of Galloway); II: Or a lion rampant gules armed and langued azure debruised of a ribbon sable (Abernethy); III: Argent three piles gules (Lordship of Brechin); IV: or a fess checky azure and argent surmounted of a bend sable charged with three buckles of the field (Stewart of Bonkill); over all on an inescutcheon argent a man's heart gules ensigned with an imperial crown proper and a chief azure charged with three mullets of the field (Douglas).
at June 25, 2021