Returning briefly to the fourth section of our classification where we place arms in which charges representing part of the bearers' names are combined with ordinaries we can place the chevron and wrens of Wrenbury; arms recorded in Daniel King's Vale Royal but a family extinct by the time of the Visitations. 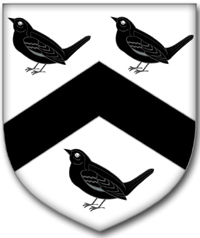 WrenburyArgent, a chevron between three wrens Sable.
at May 05, 2021