In our fifth group, in which the names of the bearers suggest some quality of the charges, the allusiveness of the arms is naturally less immediately obvious, though the pun becomes apparent with a little thought. Surely it is not taxing credulity too far when Savage shows six little black lions as the emblem of his fierce name. 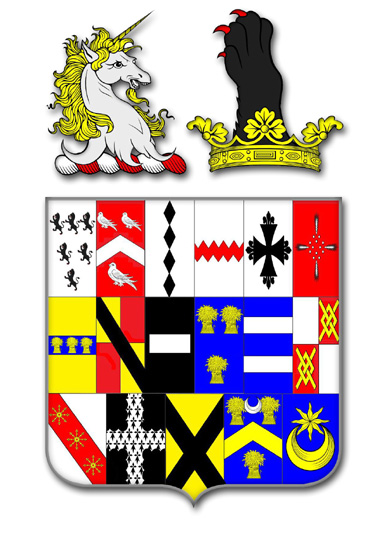 Arms: Quarterly of seventeen -
1 Argent, six lioncels rampant 3,2, and 1, Sable.
2 Gules, a chevron between three martlets Argent [Walkinton]
3 Argent, a pale fusilly Sable [Danyers]
4 Argent, a fesse dancettee Gules [Chedle]
5 Argent, a cross formee, the ends fleury Sable [Swinnerton]
6 Gules, a cross Ermine [Beke]
7 Or, on a fesse Azure, three garbs of the field [Vernon]
8 Quarterly, Or and Gules; over all a bendlet Sable [Malbank]
9 Sable, a fesse humettee Argent [Bostock]
10 Azure, three garbs Or [Randolph Blundeville]
11 Azure, two bars Argent [Venables]
12 Quarterly, Argent and Gules, in the second and third quarters a fret Or [Dutton]
13 Argent, on a bend Gules, three escarbuncles Or [Thornton]
14 Sable [Vert?], a cross engrailed Ermine [Kingsley?]
15 Or, a saltire Sable [Helsby]
16 Azure, a chevron between three garbs Or, a crescent for difference [Hatton]
17 Azure, an estoile issuant from the horns of a crescent Or [Minshull]

1 Crest: An unicorn's head Argent, erased, mained [and armed] Or.
2 Crest: Out of a ducal coronet Or, a lion's jamb erect Sable.