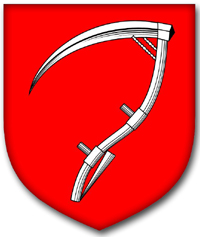 In our last group we shall find the humour beaten even thinner still when the name of the bearer only hints delicately at something which the charge in the shield has to do with. Praers with his silver scythe on red carries an object which seems to have little suggestion of any pun however, when we remember that he too is of the band of punsters, and that the charge in his knightly shield is the tool wherewith his meadows were mown, we may be able, stretching a point, to see some pun. Snelston of Snelston, who bears the same arms but differently coloured a black scythe on silver makes his arms pun more closely on his name; for the first three letters of it are a hint at the word sneyd, which is the term for the handle of a scythe. 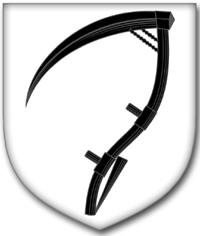