Bird of Yowley and Bird of Crew
Arms: Quarterly 1 & 4 Per pale Argent and Or, an eagle displayed Sable.
2 & 3 Argent, an ass's head erased Sable [Hocknell] 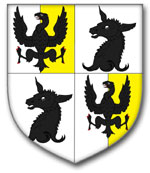 By now, it should be obvious that any attempt at classification will show that not all examples of canting arms are of equal merit; some are simple and obvious whilst others are tenuous at best and obscure rather than obvious. Some names do not lend themselves so readily as others to this treatment, and of course this form of humour may not have appealed with equal force to every man whose name might have suggested the devising of a canting coat. Nevertheless, in our first group we can count Bird of Yowley, whose parted shield of silver and gold is charged with a black eagle.

While we are discussing the arms of Bird of Yowley, we may as well touch on the 2nd and 3rd quarters of Hocknell. The black ass's head which Hocknell of Hocknell bore on silver is not a very obvious pun until we remember that the humble ass might quite reasonably be regarded as a little hackney.