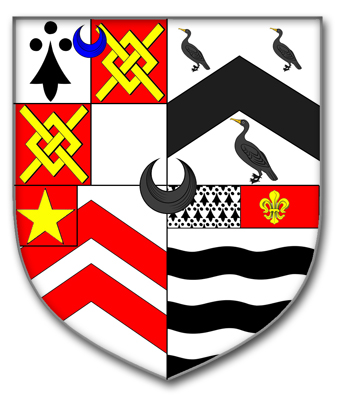 Arms, Quarterly of four: 1, Quarterly, Argent and Gules, in the second and third a fret Or, in the first quarter an ermine spot; over all a crescent for difference; 2, Argent, a chevron between three cormorants Sable; 3, Argent, two chevronels Gules on a canton of the second, a mullet Or; 4, Barry wavy of six Argent and Sable, a chief per pale Ermine and Gules, the latter charged with a fleur-de-lis Or; a crescent Sable for difference.

[I have not rendered these arms in a lozenge]

*I received a reminder from Richard Lichten of a note by Clive Cheeseman (Coat of Arms, Journal of the Heraldry Society, Volume II 2006) that the Warburtons claimed male-line descent from Adam of Dutton, who had half the manor of Warburton in frank marriage with Agnes daughter of Roger son of Alured, the other half being granted to him by the Prior of St John of Jerusalem in 1189; see also G . Ormerod, History of the Count y Palatine and City of Chester (3 vols., London 1819), vol. 1, pp. 430-1. The family therefore frequently displayed the arms of Dutton in first place, sometimes adding a crescent to indicate that Adam was a second son.