One or two of my readers may remember the "old" days, prior to the more recent popularity of Facebook and other heraldry forums, when we all gathered in that bear pit known as rec.heraldry, a Google Groups Forum. A familiar voice was that of Graham Nassau Gordon Senior-Milne, who owned the dignity of the Scottish feudal barony of Mordington, and had long maintained that, as a feudal baron, he had a right to a seat in the House of Lords.

On the 6th April 2011 Mr. Senior-Milne wrote (on rec.heraldry):
"Scottish feudal barons never ceased to be peers of the Scottish parliament. They were always under a duty to attend but were relieved of that duty only on condition that and only for so long as they appointed commissioners to represent them. The underlying duty to attend was still there and was never removed. Since they remained peers of parliament with a duty to attend they became, as peers of Scotland, peers of Great Britain under the Act of Union (sections 22 and 23). It is really very simple. And since Scottish feudal barons became 'peers of Great Britain' in 1707 they have continued to be so ever since and all of them became entitled to sit in the House of Lords under the Peerage Act of 1963 (The Act states that 'The holder of a peerage in the peerage of Scotland shall have the same right to receive writs of summons to attend the House of Lords and to sit and vote in that House as the holder of a peerage in the peerage of the United Kingdom; and the enactments relating to the election of Scottish representative peers shall cease to have effect.') Since their peerages are not 'hereditary' under the terms of the House of Lords Act 1999 but are 'in commercio' (they can be bought and sold), they were not deprived of their right to sit in the House of Lords by that Act. Ergo, I am a peer of Great Britain and entitled to sit in the House of Lords. Thank you. Now, where is my ermine cloak?
Of course, as peers of Great Britain they are entitled to supporters.
I suggest that you take the Lord Lyon to court on this basis.

PS This legal argument is watertight. "

One respondent quipped "If this is so, why haven't you taken your seat?" and another commented that "He may be right (I doubt it) but only a fool goes to court to fight a battle he cannot win."

Well, whether you regard Mr Senior-Milne as a fool or not, he clearly decided that he had a case and took his battle to court. It's probably not surprising that he did given that, in the opinion of the court, he is a serial litigator. Sadly, for him, he lost and his dreams of being wrapped in ermine are no more; he has lost his ermine comfort blanket!

The full judgement of the Court can be found here: https://bit.ly/3f9fmxv

The report of the case in the Scottish Legal news can be found here: https://bit.ly/3iCV4yD

"Based on this analysis, he concluded: “We would accordingly have concluded, if it were relevant, that the Barony of Mordington did not confer any status either as a peer or as a member of the House of Lords. It was a minor barony unconnected with any peerage. On that basis, even if there had been an error in the Lord Ordinary’s reasoning, we would have refused permission to proceed.” Lord Drummond Young. 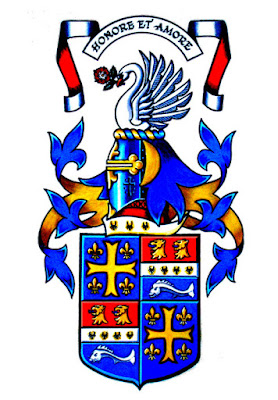 The armorial bearings of the (feudal) baron of Mordington,
a dignity which does not allow the holder a seat in the House of Lords.

Blazon: Arms: Quarterly, 1st & 4th, Azure a cross moline between four fleur-de-lys Or (MILNE); 2nd & 3rd, per fess, Gules and Azure, a fess ermine between, in chief, two lions heads erased Or and, in base, a dolphin naiant embowed Argent (SENIOR).
Crest: The head, neck and wings of a swan bearing in its beak a Tudor rose Proper seeded Or.
Motto: 'Honore et amore' ('Honour and love').