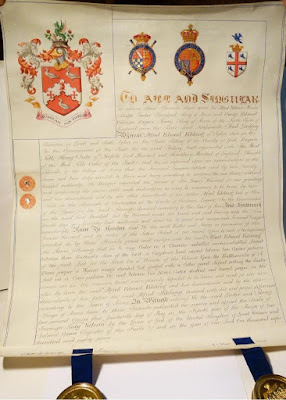 Described by the seller as: "From the late Lord Boston of Faversham's (1930-2011)  collection of Queen Victoria related items, he had a most interesting life.  After serving in the RAF National Service and getting a Degree in Law, he joined the BBC where he produced current affairs programmes.  He was then called to the bar by the Inner Temple in 1960.  He was very much into politics and had been a member of the Labour party since he was 16.  He won the Faversham bi-election in 1964 and was created a life peer on Harold Wilson's resignation in 1976.  He spent 10 years being a chairman of a broadcasting company and then went back to Westminster where he served as Deputy Speaker until 2011.  Lord Boston was an avid collector and I used to bump into him at the live auctions.  Be assured all the items are from his vast personal collection.  We are all very fortunate to have the opportunity to buy them once again. These will be gone in no time so please do not hang about...

This is another UNIQUE item....in wonderful condition. The black leather box which holds the document and seals is in its own Pine box as well... there is no lid for this pine box.
So the black leather rectangular box is in superb condition with very minor scuffs and rubs, it has been well looked after, it has embossed tooling on the leather as well as gilt embossed Royal CROWNS with the VR cypher..cipher ... 3 on the lid and 3 at the front ...it has 2 inset brass locks ...these work fine. It has a fresh scuff in the centre of the front just above the VR .... this was done on the auction viewing day which has PEEVED me no end...since it was not like this when I first viewed the lot.. Folks should be more careful with valuable items, especially when they have no intention of bidding on an item.

So open the lid... the interior is clean with blue and gold design paper... the scroll is rolled up in the back and has two attached brass SEAL tins.. these both have a CROWN upon the lid.
The seals are within the tins and adjoined to the document via blue ribbons... these seals are WAX....both in SUPERB condition and both are different.. left hand side one is for THE SEAL OF THE OFFICE OF GARTER PRINCIPAL KING OF ARMS.... the right hand side one says .. THE SEAL OF GEORGE EDWARD COKAYNE ESQ, NORROY KING OF ARMS.
The document is an official illuminated GRANT OF ARMS ...and it is all hand written and has a lot of important peoples names upon it  whom were in office during this time in relation to Granting the Arms to this man.

On the left hand side it has 2 embossed seals and these have a small slivver of silver in them as well... just as normal with such documents.

So now to unroll the Grant of Arms... you will need to put weights in the corners as it wants to spring back into a roll.. you will see the SIGNATURES near the ribbon of the two men that have their seals at the bottom of the document.

So looking at it now.. you will see how elaborate it is... it has his coat of arms on the left with the Latin motto..  NUNQUAM NON FIDELIS ... and 3 smaller Coats of Arms above the main wording... it goes on to mention Sir Albert William Woods, Knight Garter Principal King of Arms and George Edward Cokayne, Esquire, Norroy King of Arms of the North parts of England from the river Trent northwards Send Greetings to ALFRED EDWARD KITCHING of Ayton Firs in the Parishes of Great & Little Ayton in the North Riding of the County York ...then it goes on to mention The Most Noble HENRY DUKE of NORFOLK , Earl Marshal & Hereditary Marshal of England , Knight of the Most Noble Order of the Garter... it then goes on to ask permission to Grant the Arms of the family and mentions his late father  Alfred Kitching of Elm Field in the borough of Darlington in County Durham ...then it goes on to Grant him the Arms and describes the Arms as they do in Latin terms.. ...then it goes on to give the date and Queen Victoria 1887.
So .... who was Alfred Edward Kitching.

Alfred Edward Kitching was born 1858 and died in 1939 ..He inherited Ayton Firs from his father .. he married Annie Backhouse Richardson and one of their sons was in the team that won a Gold medal in the Olympics...... these surnames being familiar to me allready from the famous Darlington Quaker familes related to the Pease familes.. the Backhouse being Bankers and the Richardsons .. Shipbuilders..later from the Potto area ... Alfred was Mayor of Darlington and he started the Whesso Foundry amongst other things..there are many pages on GOOGLE about this family ...read below about them both on this website below 1929 and 1939.

The item(s) are shown next to an English 1 penny which is 20mm dia for scale."

As usual, I have created an album and added the other images to it here: https://bit.ly/3fxCwhp