One of the pleasures of editing the Cheshire Heraldry website over the years is that I have benefited from speaking to and corresponding with many people who share my enthusiasm and one such person is Philip Beddows of the City of London who very kindly sent the bookplate of John Vardon to add to my collection. 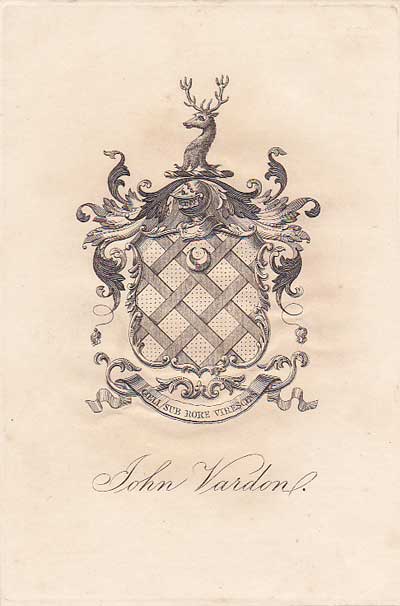 “John Vardon lived at No. 3 Gracechurch Street in the City of London and came from Congleton in Cheshire. His family’s name was spelt “Verdon” until the later 1600s. They were one of the cadet branches of the de Verduns of Alton, who settled in Cheshire – at Woodford and Fulshaw, Wilmslow. They are remembered in the name of Vardentown near Alderley, which was originally spelt Verdontown.

The other Verdons whose heraldry appears in quarters of some Cheshire families, Sable, a lion rampant Argent, are the Norfolk branch of the family. These arms were recorded at the Dunstable Tournament in 1309, where members of the de Verdons of Norfolk were present with the head of the family, from Alton; the need to tell them apart from each other at the tournament may be the reason for the difference in their heraldry.”