The latest entry to the Cheshire Heraldry website is that of Wettenhall of Hankelow. In the Visitations Mss for 1663 quarters 2 and three are not identified however, for a Cheshire heraldry enthusiast, quarter two is quite easily identified as Alfram (which is possibly my least favourite coat of arms by virtue of poor colour/tincture contrast). Quarter 3 is quite probably Wallington or Waddington of Craven (according to Papworth's).

The two Wettenhall entries in the Visitations of 1613 have pedigrees but no arms and the entry for the earlier Visitations of 1530 to 1580 are those of Wetnall of Cholmoston, alias Chomston with the same pronominal arms but with the arms of Crewe in quarters 2 & 3.

Daniel King, in his armorial produced for the Baron of Kinderton circa 1630 records two coats for Wettenhall, the one shown in the Visitations he records as Wetnall (Wetenhall), Vert a cross engrailed Ermine (Modern arms) with the alternative being noted as Wetnall (Wetenhall) Vert a bend Ermine (Ancient arms).   Yet another example of arms evolving. 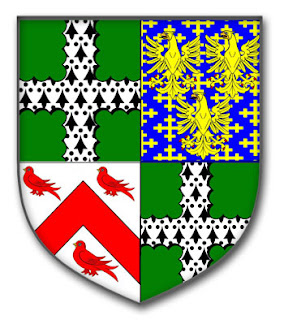